Really the one American John Woo effort that reflects the director’s thematic and stylistic Hong Kong roots. Hard Target also has a biting critique of homelessness under it’s countlessly impressive action sequences, and it’s to Woo’s credit he uses Jean-Claude Van Damme’s sweaty charm and brutal punches to frame such ideas. Also, the group of hunter villains in the film actually mean something to the vision beyond their flashy ability to kill, representing a dominant and dangerous elite with the ideology that all humans are not created equal. Woo gives Van Damme all the chances to destroy these truly evil men, more importantly with style and grace unseen in his later pictures. 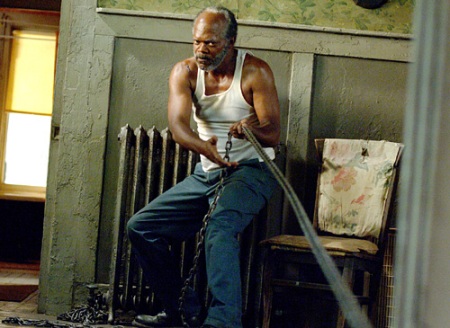 Black Snake Moan is a stunning anomaly compared to most current American cinema. Written and directed with a keen sense of humanity by Craig Brewer, Black Snake Moan takes chances concerning almost every cinematic function. It’s acting, including the brilliant Sam Jackson, Christina Ricci, and not surprisingly Justin Timberlake, resembles a choreographed reckoning of lost souls finally finding some semblance of hope. It’s music, a sharp mosaic of Blues tunes, represents the torment these tortured people have felt. And finally, the story, chalk full of potential disaster areas, consistently rises above cliche and paints a picture worthy of many dynamic explanations concerning the need for connection, whether it be with art or another person.

During these dreadful summer days of lethargic sequels and non-entity Hollywood passion projects, what impresses me most about Black Snake Moan remains it’s dedication to a vision – Brewer maintains his passionate view of the characters throughout, never over simplifying their plight or their redemption. Black Snake Moan might be about beating back past trauma’s and resurrecting the soul, but the film never sugarcoats these experiences for the viewer. As Jackson’s Bluesman Lazarus says to Ricci’s “white trash” Ray in their final embrace, “We’ll always have hope in each other.” It’s a phrase worth living your life by.

This is Paul Verhoven at his most nasty and subversive. Starship Troopers gives you something new with each screening, and I still can’t believe it was made in the first place. Verhoven crafts a startlingly funny and scary vision of mass slaughter, terrorism, and youth, all framed by some truly amazing special effects, and this type of combination might not be seen again from Hollywood.

The first hour of Seraphim Falls is so masterfully paced, exquisitely photographed, and brilliantly acted, it’s a massive disappointment when it comes crashing back down to Earth in it’s second half. Director David Von Ancken begins his often impressive but uneven western with silence – Pierce Brosnan’s bearded trapper Gideon sits peacefully on a snow packed mountain side. The calm shifts drastically when a bullet rips through his shoulder, throwing him down the mountain side. Liam Neeson’s Carver appears from the tree line, accompanied by a pack of trackers, seemingly hell bent on capturing this obscure mountain man. Gideon’s escape plays out during the film’s first act, a long, brilliant escape through the white forest and rivers of a land frozen beyond recognition. Brosnan’s character has no dialogue, just the grunts and growls of a man trying to survive. We get a little exposition from Carver as he and his men hunt from close behind. Seraphim Falls is above all things a singular trajectory of iron will and past conflicts, and Von Ancken sets this relationship up perfectly in the opening moments. This bare bones approach (with dialogue, not action) is haunting, letting the viewer attempt to piece together the “why” and the “who’s” of a story which continues relentlessly into the desert region below. Unfortunately, Seraphim Falls turns into a pretty standard western. focusing on slow motion flashbacks, simple explanations, and a tidy ending. But both lead performances are impeccably crafted and for a good portion of the film, Seraphim Falls is a western fan’s dream come true.

Billy Ray strikes me as a very determined director. At first glance, his films represent important, edgy projects revealing the underbelly of American corruption, especially in typically powerful, honest positions. But both his first project Shattered Glass (2003) and now Breach, which deals with the biggest security breach in U.S. history, produces a tame, almost impotent feel in both direction and action which irritates and disrupts the story consistently. Both films are impressive attempts at dissecting the reasoning behind turning on those you’re trained to love, a theme which shines through the lead performances by Hayden Christensen (as the plagiarist in Glass) and Chris Cooper as the traitor Hanssen in Breach. However, there’s a lack of danger or tension, especially in Breach, which moves at such a somber, deliberately monotone pace one can’t help but get frustrated. Espionage has never been more banal (see De Niro’s The Good Shepherd for an improvement). Breach is anchored by Cooper’s excellent performance, yet it never attains a gravitas one would expect from a powerhouse incarnation, mainly because the film itself doesn’t know what to do with him, represented best and most often by Phillippe’s clerk O’Neil. I wish Ray would take a few more chances in terms of story and character, in turn livening up his very typical proceedings of chameleons out maneuvering their moral captors.

Not surprisingly charming, but certainly surprisingly sincere. This film isn’t consumed by the model, i.e. the Hollywood romantic comedy genre, but by the couple themselves and the human traits which stand in their way of love. It’s a really interesting progression, at least for a while, especially during the artistic creative process between a has been pop singer and a slogan writer. Unfortunately, neither Grant nor Barrymore’s character sees the desperation in the other’s eyes for very long, floating through a conflicted environment without a care in the world.

More convincingly heroic than Sergeant York and more character driven than Air Force, Howard Hawks’ Flight Commander is a masterful look at British airmen fighting in Germany during WWI. This war film shy’s away from the battles, preferring moments of brutal decision-making by commanding officers concerning when to send men to their deaths. Hawks sets up the relationships between these aviator’s with keen attention to sacrifice, past experience, and a revolving cycle of death which inevitably and tragically promotes characters into roles of power, forcing them to better understand the pressures their predecessors felt. It’s a war film bent on genre traits, but one which doesn’t adhere to them universally, sliding in deft action scenes highlighting the characters themselves as opposed to strictly focusing on the impressive scope of the set pieces. Flight Commander, like all of Hawks’ masterpieces, puts the character into tense situations with the greatest attention to atmosphere, and Richard Barthelmess’ tortured commanding officer Courtney exemplifies this mood perfectly as he makes the ultimate sacrifice to salvage his friend’s life. But the cycle continues, as when Douglas Fairbanks Jr.’s Scott takes the reigns Counrtney leaves behind, fully understanding the horrors of bureaucracy in war.