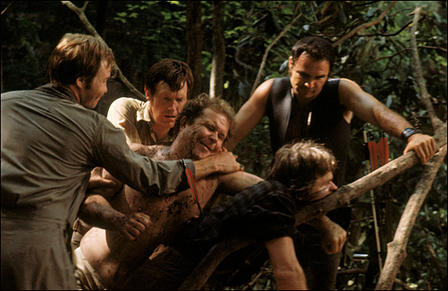 The harsh physical landscapes of John Boorman’s masterpiece Deliverance measure equal parts serenity and chaos. The rivers, trees, rocks, and gully’s are at once deceptively accommodating and menacingly savage. When Jon Voight, Ned Beatty, Burt Reynolds, and Ronny Cox set off on their river canoe trip with smiles and naivete, the lush environment engulfs them with overwhelming beauty and uncertainty. The “dueling banjo” foreshadowing aside, it’s the diagetic sounds of nature which create the most haunting of warnings and lasting results. Boorman, with the help of the brilliant cinematographer Vilmos Zsigmond, utilizes a sense of wildness through picture and sound, letting their protagonists get lost in the natural shuffle of life and death. Considering the memorable and horrific scenes like Beatty’s “squealing like a pig” and Voight’s climb up the rock face, it’s what lies beneath the river that often feels the most devastating. Progress, as the men say in Boorman’s voice-over opening, has it’s price to bear, and the city boys pay more than their fair share. Deliverance remains one of those films able to recognize the dread in silence, personified directly by Voight’s lasting guilt of survival and natural opposite- the inevitable eerie moans of the glassy river surface covering up the humanity lost.