One of the great films on the complex nature of communication and body language, specifically the resulting contortions of feeling springing forth during moments of high tension, lust, and disappointment. Antonioni’s masterpiece sublimely maneuvers through these motifs by inspecting various relationships between men and women; the shared desires, the contrasting needs, and the dense emotional foliage hiding under the surface. The shear beauty of the visuals compliments the haunting rhythms of character action occurring on all three planes of the frame and the universality of the themes feel incredibly fresh even today. 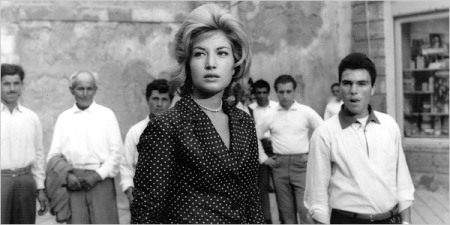 It’s hard to imagine modern cinema without Antonioni’s fluid long takes, crisp sound design, and epic spaces. The sequence on the island, where Antonioni’s characters search for their missing companion, slurps the life out of the crashing ocean waves and redirects the energy onto the characters’ building conflicts.

L’Avventura creates a perfect parallel between character and landscape, maybe the best I’ve seen. Antonioni seems to be speaking about humanity through the only language that comes close to making sense; the aesthetics of cinema which enable a subtelty and ambiguousness worthy of the small moments shared between lovers. The last shot of the film seen below is Antonioni’s shining example. 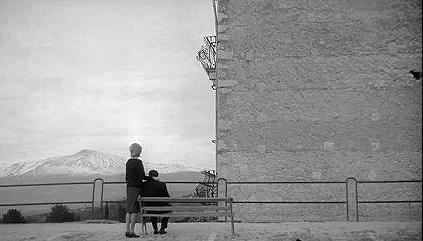 And to think, I made it through film school and Graduate school having never seen this. The first of many viewings, I’m sure.

With Grave of the Fireflies, Isao Takahata crafts a deeply sobering picture of deterioration, love, and memory amidst the horrific Allied fire bombings of Tokyo toward the end of WWII. Like many great films about the cost of war, Grave of the Fireflies poignantly views epic devastation through the eyes of two children, older brother Seita and young sister Setsuko, who are orphaned after the initial attacks. Their plight and emotional abandonment could signify any Japanese child struggling to survive the harsh rationing of a war torn countryside facing defeat, and in turn, all children whose innocence gets hollowed out by draining and debilitating adult conflicts. Takahata plays with imagery beautifully, juxtaposing visions of horror (charred bodies frozen in time) alongside those of harmony (Seita and Setsuko illuminating their makeshift shelter with fireflies). This haunting strategy of light and dark coexisting creates a duality of emotion impossible to shake; paralleling both the siblings’ brave resolve to reunite with their soldier Father, and the imminent and inevitable heartache of viewing a way of life crumble before their eyes.  Most importantly, Grave of the Fireflies shows how two children take responsibility of their own survival in a time when the surrounding adults fail as human beings. Seita and Setsuko share a sense of family and honor despite being forgotten by an adult world tearing itself apart. For director Takahata, the greatest casualty of war is compassion.

Essential viewing because it’s the debut of director Gus Van Sant, but color me confused why this film makes such an impact on people. Yeah, the subject matter is risky, the avant garde style intriguing, however the love story is very basic and the political undertones wash away easily. Maybe multiple screenings will eventually help, but right now I’m stuck between apathetic respect and dubious dislike.

Vincent and Theo structures itself around the turbulent personality of Vincent and the repressed vision of his art gallery owner sibling, Theo. This fluctuating love/hate relationship becomes the core virtue and structuring technique of Altman’s story, yet the film doesn’t contain the dense stylistic layering or meandering beauty of the director’s best work. Strange considering the haunting and violent lead character on display. Instead, this overlong jaunt with the Brothers Van Gogh comes across as beautifully muddled, an enigmatic snapshot of two brothers grappling with unseen personal crises concerning vision, impotence, and taste. Akira Kurosawa’s vision of the painter in Dreams feels even more visually impressive after watching Altman’s banal and studied treatment of an artist in conflict with the world.

Two of my favorite American filmmakers, Michael Mann and Clint Eastwood, are currently undertaking films of great potential (not surprisingly these are my number one most anticipated movies of 2008 and 2009). Both directors are working in the crime/mystery genre and in period piece settings, rare for Mann, not so much for Eastwood.  Clint’s film Changeling stars Angelina Jolie as a mother who suspects her recently returned son (he was kidnapped) is indeed an impostor, an enticing enough premise under the guidance of such a master. Mann’s gangster saga Public Enemies stars Johnny Depp as John Dillinger and Christian Bale as Melvin Purvis, the FED chasing him, and might be the best fit between material and artist in a long while. Pictures of Eastwood’s film can be found all over the Web and aren’t very indicative of the master’s grace and style, but just yesterday the first images of Public Enemies emerged and it’s astonishing how the mere composition of the amateurish photos capture Mann’s signature professionalism. Using the recently released pictures of a supposed Dillinger bank robbery under way, here’s a few notes to peak your interest.

One of Depp’s thugs moves his Tommy Gun methodically across the screen. 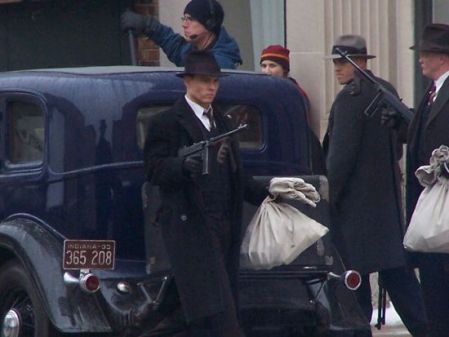 A pitch perfect shot of Depp in the Mann universe.

Robert Altman dips his toes into the deep, psychological waters of Bergman and De Palma with this masterfully creepy tale of fractured identity and traumatizing guilt. Susannah York plays Altman’s upper class heroine who slowly folds under the pressures of overlapping memories, images, and nightmares, taking down her male suitors in the process. Images doesn’t feel like other films of this ilk mainly because it’s so personal and deranged from an aesthetic point of view. Vilmos Zsigmond’s haunting images meld with Stomu Yamashta’s schizophrenic sound sculptures and John Williams’ underlining score to devastating affect, creating an altogether horrifying visceral experience.

The tragedy of inaction rears its ugly head during John Huston’s depressing tale of alcoholic English diplomat Geoffrey Fermin (Albert Finney) living in Mexico right before the beginning of WWII. While seemingly drinking himself to death, Finney exhibits some truly impressive and turbulent mood swings and every so often lets out a glimmer of Fermin’s humanity between long gulps of Mescal. Through Huston’s meticulous attention to the local feel and menace, one can clearly see how much he adores the drunken buffoonery and shady brothels more than the poignant themes of guilt and cowardice paralleled between Fermin’s personal actions (or lack thereof) and those of the European governments facing Hitler’s threatening advances. So in the end, Huston’s priorities seem skewed.