How does a conflicted reviewer confront such a universally liked film as The Dark Knight? The hostile way most are defending Nolan’s film against negative reviews makes this a disturbing question, and taints what should be a defining moment for Hollywood filmmaking. Critics like David Denby, Dave Kehr, and a few others have been unfairly lambasted because of their negative reviews, mostly by the masses of viewers (some just plain idiots) who have instantly idolized the film (The Dark Knight is surprisingly at #1 on IMDB.com). I think this entire situation, admittedly flamed by the Heath Ledger tragedy, shows just how hungry the American movie going public is for mainstream entertainment defined by engaging, pertinent ideas, and to what lengths they’ll go to defend this collective passion. The Dark Knight does deliver a mosaic of emotions and tensions to feast on; the nuanced evil of Ledger’s Joker, the wide ranging scope of the Brothers Nolan’s script, and the haunting vision of Gotham City crumbling under the fear of uncertainty. But the paralleled insanity occurring over the film’s release just shows how far Hollywood has lowered the bar, that a very good entertainment elicits screams of outrageous defense as illogical as The Joker’s devastating mind games.

Hoopla and fanboy evangelicalism aside, The Dark Knight fascinates because it closes the gap between superhero and supervillian, making Bale’s stoic Batman and Ledger’s maniacal Joker two sides of the same coin. The real tragedy of The Dark Knight becomes how Harvey Dent, Rachel Dawes, and Gotham City as a whole get caught in this mortal battle between chaos and order. Nolan doesn’t sugarcoat the loss involved, nor does he reflect any unjust sentiment in the eyes of these consistently enraged characters. Unlike Nolan’s origin story Batman Begins, The Dark Knight feels scattered, apart of everyone’s fearful point of view, obsessed with how The Joker’s destruction crosses social and economic boundaries (look at the tense ferry sequence). The greatest element of The Dark Knight remains its mystery – The Joker’s contradicting autobiographies, Bruce Wayne’s ethical malfunctions, and Harvey Dent’s extreme cerebral and physical pain. The Dark Knight feels like it could go a number of directions, giving the audience a riveting sense of imbalance, an unlikely motif for a genre that depends on the grounded and simplistic heroism of its subjects. Thankfully, the entire film revels in this incompleteness, taking Ledger’s incendiary performance as its heart song while opening up the franchise for greater battles of morality and ethics down the road. But a masterpiece, it is not. Those faceless souls ready to violently anoint The Dark Knight as the second coming might be playing right into The Joker’s hands. 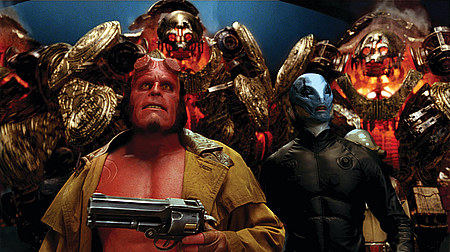 Guillermo del Toro’s spectacular monsters, whether it be in Hellboy, Pans Labyrinth, or the just released Hellboy 2:The Golden Army, often overwhelm the narrative universe they populate. The director’s almost obsessive desire to uproot these beasts into his own special spotlight becomes simple spectacle instead of another fascinating layer to his story. Hellboy 2, while once again anchored by Ron Perelman’s entertaining and forlorn performance, doesn’t have much on it’s mind beyond watching these creepy crawlers and epic titans of the underworld, admiring their tenacity, scale, and sometimes humanity. While undoubtedly a passionate visual filmmaker, Guillermo del Toro has always seemed vastly overrated to me, a visual dynamo who wows with surface area, the perfect merger of fanboy passion and high art aspirations. But besides The Devil’s Backbone, his films lack the character depth of his Mexican New Wave peers, especially Alfonso Cuaron.  Many people focus on the original magic in del Toro’s films and are seduced into ignoring his glaring use of cliche. For me, one can’t supersede the other, no matter how many monsters flood the screen.

Chaplin, Lubitsch, Hitchcock, Godard, Spielberg. For cinephiles, these names instantly recall a lasting and powerful artistic sensibility, a meeting of form and function so influential the footprints of their work transcends film as a medium. The Pixar Animation Studios, a visionary force of artists who have been responsible for countless cinematic wonders over the past decade, belong in this esteemed company. Pixar’s latest animated film WALL•E, about a soulful robot compacting endless mounds of trash on a desolate, human-less Earth, may be their most hopeful and touching achievement yet. The first forty minutes of the film play out like a great silent comedy (as already noted by every worthy film critic), but Earth’s stark landscape of trash heaps and discarded waste makes for an astounding contrast in tones when juxtaposed with the lovely dance of instinct and compassion between WALL•E and EVE. WALL•E seamlessly explores the contrast between want of consumption and the need for emotional contact, a crucial thematic dichotomy in our current artificially intelligent age. By now, Pixar’s skill at constructing stories for children and adults alike has become a worthy and economically successful calling card. But their Lubitsch Touch, their essential artistic element is the consistent realization of humanity everywhere outside the human self, within toys, bugs, fish, rats, and now A.I. beings. WALL•E relishes the beauty within the simplest of experiences, like the touch of a hand, the smell of a flower, or sound of water splashing beneath your feet, graceful moments which seemingly have grown out of style in a world desperately desiring images and feelings not their own. WALL•E, in all it’s wonder, shows the joy in seeking an existence beyond selfishness, consumption, and ego, and the reward of choosing life over mere survival.

Most Mumblecore films drive me nuts with their irritating characters and lackadaisical cinematic style, but there’s an undeniable artistry behind Aaron Katz’s Quiet City which defies easy categorization. The simple narrative trajectory avoids simplicity, relying on the paralleled silence of a city bustling below the surface and two youths eyeing a meaningful connection. Maybe more to follow…

A sublime slice of Southern Americana from John Sayles, a true master of regional storytelling and nuanced ensembles pieces. In Honeydripper, Sayles compliments his usual layered dialogue with an expanding visual dynamic subtly referencing the burning social contexts of the 1950’s.

With the help of cinematographer Dick Pope, Sayles instills a roving sense of the past which haunts each character as they traverse through the sunny stillness of the Arkansas countryside, a place framed by blatant racism and subtle jealousy. While music (both played and imagined) helps structure the rambling story, a shared sense of place connects diverging moments of sadness and joy, highlighting the beauty and necessity of each.

The opening twenty minutes of Kimberly Pierce’s Stop-Loss brilliantly deconstruct traditional combat film aesthetics through a harrowing juxtaposition of dynamic video-diary footage and stark, meticulously staged battle scenes framed by an unsettling and shifting Iraq War hell. Unfortunately, the resulting narrative and return stateside (which overtly addresses both personal and national tragedies) fades away from this fascinating conflict between ideology and technological representation, instead choosing to wallow in all the cliches it has just challenged.

Is it too early to call Jeff Nichols’ Shotgun Stories the American film of the year? Probably, but it’s a devastating masterpiece all the same, a film consumed by a generational hatred occurring on multiple levels between two sets of half-brothers feuding over the honor of their recently deceased father. Unlike typical Hollywood representations of the deep South and it’s inhabitants, Shotgun Storiesdepicts a complex locale and population embalmed by the silence of a beautiful and longing countryside, entrenched in the daily routine of a slow-paced existence completely at peace with itself. But underneath the wide shots of open fields, stagnant rivers, and desolate country roads lies a forging tension, layered by generations of past experiences which have carved these characters into ticking time bombs. On one side Son (Michael Shannon), Boy (Douglas Ligon), and Kid (Barlow Jacobs), remember a drunk father who they’ve hated all their lives, and on on the other, four young men of the same patriarch who represent a more affluent, born again affinity. The impending clashes occur offscreen, and we are left, like the characters, with the consequences of their violent actions. Shotgun Stories paints a very American nightmare, where vengeance is validated through the protection of family, property, and honor, no matter who gets caught in the crossfire. The most interesting aspect of Shotgun Stories remains the unseen influence parental control has over the hatred, ignorance, and destruction of a family torn apart by years of division. When a Civil War of such glaring complexity achieves this a high level of involvement and tension, the end result is nothing short of breathtaking.