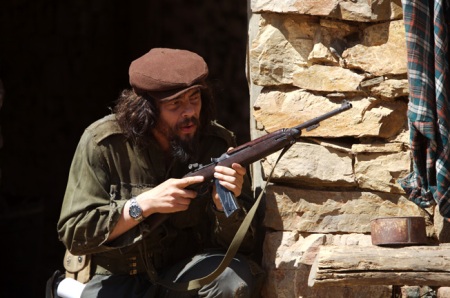 Che, Steven Soderbergh’s beguiling 4 1/2 hour epic on revolutionary Ernesto “Che” Guevara, purposefully avoids advancing the psychological or “controversial” motives behind its subject. Instead, throughout both the grandiose myth-making of the film’s first halve entitled The Argentine, which follows Che’s involvement with the Castro brothers in the Cuban Revolution, and the second, more brutally constrained Bolivian segment entitled Guerilla, Soderbergh contemplates Che as a man driven by a private, unseen motivation often only expressed through the volatility of his environment. Soderbergh sees this particular modern history as a series of doubles, structuring binaries which compliment and contradict each other. Whereas The Argentine and it’s fragmented set-pieces charting the gradual invasion of Cuba hints at an almost romantic vision of revolution, Guerrilla shows a failure of equal proportions – an entrenched Che surrounded and hunted by Bolivian special forces. This pattern persists, and whether it’s the jungles of Cuba juxtaposed with the forests of Bolivia or the hint at love in The Argentine promptly smashed by the absence of it in The Guerrilla, Soderbergh documents Che as an idealist defined by his lasting commitment to his beliefs and not by romantic notions of change. Unlike the countless other biopics of recent years, Che portrays a man convinced of his path, never swayed by outside forces for better or worse. This fortitude comes close to zealotry, but Benicio del Toro’s haunting performance enables a fascinating mix of ambition, sincerity, and honor to emerge making this fictional impression a fascinating onion to peel one layer at a time. Che comes close to capturing the indescribable beauties of historiographical study, the back alley’s and cul-de-sac’s of history at odds with popular culture, preconceived notions, and historical record. Soderbergh’s vision opens a window into the intimate and intricate procedures of a revolution, and the contrasting colors of success and failure that inevitably define such a complex process.