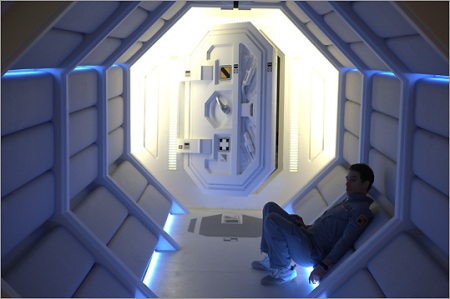 Even though Duncan Jones’ Moon stems a great deal from Science Fiction – the film is set in space, a robot is prominent, with cramped interior spaces paralleling an uncaring corporate puppet-master – its most interesting narrative aspects depend entirely on genre traits of the Melodrama. Instead of the standard love triangle infused with jealousy or greed, the film turns inward to the multiple emotions within a single human being, molding a one man show (or is it?) around Sam Rockwell’s difficult and sobering solo performance, turning it into a slow realization of isolation and death.

There’s really no tension, or horror, or fright occurring within the story of Sam Bell (Rockwell), an astronaut who runs a mining base harvesting energy from the Moon. Just the simple and inevitable deterioration of hope in the face of complete insanity. First time director Jones doesn’t allow many scenes to unfold beyond the surface, which at first gnaws away at the pacing and bogs the film down. But as the story begins to take shape and Bell starts to unearth key information, Moon develops an interior conflict and a human complexity that resonates deeply. One of the more refreshing angles is GERTY (voiced by Kevin Spacey), the robot assisting Sam in his daily activities. We expect GERTY to turn on Sam as the story unravels (like HAL in 2001), but Jones handles this relationship in a different way, connecting the two on an emotional level that transcends expectations about interactions between artificial intelligence and humans.

Moon has it’s glaring flaws, with pockets of cinematic inanity that speak to both the weaknesses of the script and direction, but it also contains plenty of confounding and engaging intricacies, a harrowing double performance, and moments of wrenching sacrifice worthy of Sirk. In space, nobody can hear you cry.