Despite some overtly simplistic narrative devices and occasionally muddled ideologies, District 9 slowly evolves from its documentary beginnings into an engaging action film of great weight. The film flourishes when cornered by implausibility and fails when rooted in commentary, but still manages to construct a nightmarish fantasy world out the preconception of reality, becoming a rapturous experience in the final dynamic moments.

Everything in District 9 seems predetermined, a part of some larger prophecy that will undoubtably be explored in the sequels to come. For the first hour, the film plays coy with the viewer, displaying hero Wikus (Sharlto Copley) as a bumbling corporate imbecile, passive to a fault and aggressive only when flanked by armed contractor support. The alien “Prawns” are something of a marvel, fluttering, jumping, and popping with an unmatched intensity, and when the “evil” humans begin to get knocked off, that old Spielbergian impulse begins to amp up and justify some vicious violence. For better or worse, District 9 turns the tables on compassion and sympathy for human life.

Director Neill Blomkamp and his special effects team create a brilliant alternate universe overwhelmed by dirt, flies, fluid, blood, and texture – the centerpiece being a Cronenberg-style infection slowly morphing a character from one species to another. Some of the visual standouts are Blomkamp’s wide shots of Johannesburg, a city racked by decades of racial divide, purposefully shrouded in shadow by the massive mother ship, and the Alien weaponry overpowering the senses with it’s deadly accuracy and effectiveness.

But District 9 is not the revolutionary Sci-Fi film its supporters believe it to be, because unlike 2001, or Blade Runner, or Children of Men, it lacks an ambitious and thought-provoking underbelly of social critique. In District 9, what you see is exactly what you get, but that doesn’t mean it’s not a completely thrilling time at the movies.

Some very smart people, here and here, have latched onto this particularly ugly film with gleeful abandon, citing Neveldine/Taylor’s chaotic and ridiculous reckoning of style mashing style as “giddily amoral” and Statham’s brutally physical representation as “willing idiocy.” I get why both Crank films strike a nerve of anarchic bliss, both with the mass public, looking to get their rocks off on super-duper clashes of imagery, sound, violence, and misogyny, and critics excitedly analyzing the chaotic jumble as Busby Berkeley meets John Woo on steroids. Still, that doesn’t mean these films aren’t idiotic and self-fulfilling, and incredibly toxic.

However, no matter how you justify your interest in Crank or Crank: High Voltage, it’s impossible to deny that each film treats human existence as a minor afterthought, a footnote in a long masturbatory conga-line of head-shots, knife wounds, and bitch-slaps. Characters are brutally killed, sodomized, run-over, flung out of planes without the faux-pity or morality seen in big budget action films, but that doesn’t make this particular approach any more sustainable or honest, just more brutal.

Crank: High Voltage takes the style of its predecessor to an ever further extreme, spitting on narrative continuity like it was some unneeded, out of date foreign language. Compassion and loyalty are pejoratives in the world of Crank: High Voltage, which in a crazy sudden ending pushes Statham’s character to the brink of hell. In this case, maybe a third Crank will have Chelios fighting the devil for his soul, rampaging through demons, vampires, and goblins to get to the big guy himself. Or maybe not, because that would assume he had one to lose in the first place. In Crank: High Voltage, physicality, simplicity, and primitive nature destroys nuance and subtlety, and the very essence of feeling, so all we can do is absurdly laugh at the insanity. 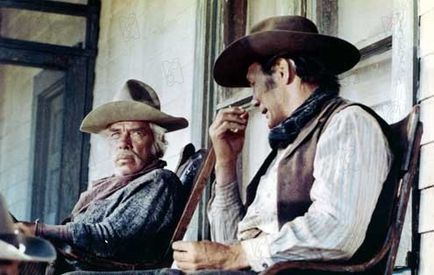 Lyrical Westerns like Monte Walsh and kindred blood-brothers Junior Bonner and Pat Garret and Billy the Kid were all released in the 1970’s, a decade of American Cinema flushed with poetic genre revisionism and complex characterizations. These films deconstruct iconography by putting a special emphasis on the conflict between friendship and survival, framing these relationships within the dynamic context of a changing frontier. Ambiguous characters replace once standard archetypes of heroism and villainy, while violence stems from social circumstance, not genre expectation. By and large these beautiful films connect the shifting landscape with character psychology, which makes Monte Walsh and its almost elemental focus on character interaction a fascinating deviation from the brooding, fateful Peckinpah films.

Monte Walsh begins in Anthony Mann country, as Monte (Lee Marvin) and Chet (Jack Palance) ride down a rigid mountainside only to encounter a wolf. Director William A. Fraker sets up these characters immediately as Monte aims his rifle, then pauses to reflect on an old story he heard about a man who wrestled wolves. Chet, tired of Monte’s musings, grabs the rifle and quickly shoots the wolf. In a moment, we learn about one man’s devotion to the memory of tradition, and another’s pragmatic determination toward moving forward. The film follows Monte and Chet as they look for work in a desolate town, ride as cowboys for a fledgling outfit recently purchased by a East-coast conglomerate, and inevitably face the pressure of change from all directions.

But plot plays second fiddle to mood and tone in Monte Walsh, a film completely keen on showing the roughly poetic interactions between cowboys, the intricacies of their grueling work, and the melancholy feeling of losing one’s self to an evolving world. Fraker greatly respects Monte and his colleagues, painting their warm interactions against closed backdrops and dirty interiors, forcing the viewer to see them as people instead of icons amidst horizons. Even when one character turns to a life of crime because of impossible circumstances, the film sees his downfall as an offshoot of the economic drain from corporate domination, the open range dwindling into a fenced in mind-numbing stasis.

The true genius of Monte Walsh stems from how it handles tragedy, how Monte is absent from almost every scene of loss while the viewer gets to fully witness each. In turn, standard Western conventions begin to impose themselves on Monte’s life like phantoms of a lost world, pushing revenge, honor, and sacrifice to the forefront as Monte deals with his own failure to save the people he loves. But for this hero, all roads lead back to that first moment in the film – where simplicity and understanding of the past become both inspiring and sorrowful, a reminder of the nostalgic times and of how quickly they fade away. Considering the mournful endings of other lyrical Westerns, Monte Walsh stands out as a sly and beautifully subtle rumination on all themes Western, and for that matter all themes American.

Deconstruction of Hollywood archetypes or glorification of cinema as complete artificiality? Tony Gilroy’s breakneck spy comedy Duplicity has elements of both, reveling in Julia Roberts and Clive Owen’s star personas only to pull the rug out from under their rouse with one last twist of disturbing comeuppance. The film continuously uses flashy dialogue and flashbacks to mask its one-dimensional characters as they traverse a combustible and unflinching corporate space, forcing a sense of simple confusion and debauchery on the entire proceedings. It’s a stark grey world of perception, manipulation, and expectation, where everyone is culpable no matter their pay grade or ambivalence.

Duplicity contains an intrinsic charm, as Roberts and Owen share a wonderful sense of chemistry and timing. But Gilroy’s rehashing of themes from Michael Clayton (greed, corporate treachery) feel tired and out of place within this specific mixture of tones, even as he skewers some truly deserving targets and avoids any resemblance of a happy ending. Most problematic is how stylistically Duplicity treads heavily into Steven Soderbergh territory, from the extensive use of steady-cam tracking shots down to the romantic sprinkles of background light. Some scenes in particular seem to be plucked directly from Out of Sight and the Ocean’s Trilogy.

Tony Gilroy is an obviously talented writer, but wears certain thematic obsessions too clearly on his sleeve, leaving little for the audience to discover or feel even as these films brilliantly flutter off the screen. Duplicity cleverly plays with our expectations about narrative convention and genre, but in the end, its confidence game lacks any lasting substance and depth.

A slew of ridiculously busy days, including attending a wedding with my lovely lady, and an epic Labor Day weekend of work and research at the Del Mar Racetrack has left me considerably lacking in the movie department. However, come Wed., I’ll be back to full throttle, checking out a number of new films, including Monte Walsh, Sin Nombre, Duplicity, District 9, Martel X 2 (The Holy Girl and The Headless Woman), and for me the long anticipated debut from Steve McQueen, Hunger. Can’t wait. 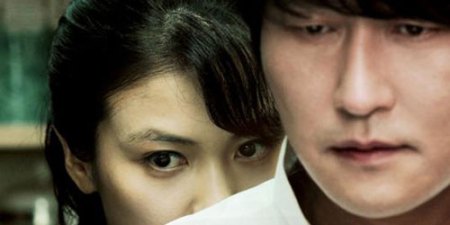 If Sympathy For Mr. Vengeance and Old Boy teach us anything, it’s that South Korean director Park Chan-wook loves to infuse his films with brutal and disturbing imagery, leaving a rash of cinematic retributions in their wake. Call it auteurism written in blood. His latest film Thirst, a vampire epic crawling with moments of shocking violence, doesn’t deviate in either department. Except Park frames his latest gruesome set-pieces within a context of dark comedy, horror, and religious guilt, making Thirst a devious character piece/love story hidden beneath genre revisionism.

Unlike his previous “Revenge Trilogy”, which all deal in narrative subversion and steep trickery from the get-go, Park treats the first act of Thirst as an afterthought, a straightforward stepping stone of exposition that evaporates once Priest Sang-hyeon (Song kang-ho) becomes a conflicted blood-sucker. The film really takes off once he meets Tae-joo (Kim Ok-vin), a desperate young woman caught in a loveless marriage and burning with repressed anger. Their slow and strange relationship builds toward a devastating moment of manipulation, pushing the film further into aesthetic oblivion while unleashing stark themes of desire, guilt, and revenge. It’s as if Double Indemnity was re-imagined as a Horror film, and the result borders on insane.

After the ridiculous and inane Sympathy For Lady Vengeance, Thirst marks a triumphant return for Park. It’s a sometimes invigorating and always interesting gothic tale, mixing tones and expectations into one unnerving cocktail. Park lets his stunning images speak loudly, even when they present a gratuitous fascinating with wounds, cuts, and veins. Despite being overly long at 130 minutes, Thirst is surprisingly content to focus closely on these two kindred souls destined for momentary happiness, then an eternity of suffering. Their bloody and hypnotic courtship leads down a path of addiction, one brimming with frightening subtext and ultimately, some much needed resonance.