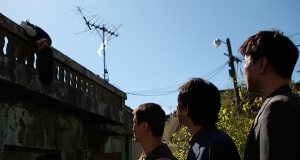 Bong Joon-ho’s Mother begins with a strange slow dance performed by an unnamed middle-aged woman (Hye-ja-kim), an improvised solitary glide up a grassy knoll. But this fleeting bout of surface inspiration cuts to a dire sight, a dimly lit medium shot of the dancer now shrouded in darkness staring deeply into the camera. This stark juxtaposition foreshadows a lengthy timeline of suffering, where repressed memories breed new traumas, forming an intricate procedural of delusions in the process. This maternal spider weaves her web with unconditional love.

When her handicapped son Yoon Do-joon (Bin Won) gets accused of murder, Mother goes to great lengths to prove him innocent, and her investigation unearths some nasty skeletons. But her extreme  worry begins before the crime itself, and long before the narrative starts. It’s what defines their relationship, the essence of each character’s fragmented view of reality. Perception is a dangerous beast, especially when dealing with such extreme emotional reactions, and Mother’s very subjective journey confronts demons of all kind.

As with his other films, Bong spins genres and tones seamlessly, mixing and matching until each dynamic scene reveals a different monster for every occasion. With Mother, time and doubt erodes all sense of self, and the truth only makes matters worse. This dedication of slow suffering makes Mother a distant cousin of Memories of Murder, Bong’s masterpiece about the failure of state institutions in the face of unseen evil. But where that films oozes with narrative and genre subversion, Mother turns into a singular exploration of pain, watching the layers of craziness produce long bouts of extreme heartache. What Mother lacks in ambition it makes up for in uncomfortable seediness.

Bong masterfully builds scenes around dirty little secrets. He crafts his films around the struggle between interior and exterior horror. By the end of Mother, this investigation of innocence turns into a familial requiem, the initial dance of freedom proving to be something far more disturbing – an admission that ignorance is indeed bliss.