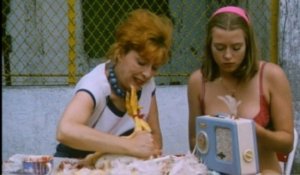 Catherine Breillat’s debut shocker signifies everything that’s fascinating and maddening about her entire filmmaking career. For the first half, A Very Young Girl offers a daring glimpse into the warped fantasies of Alice (Charlotte Alexandra), a pubescent young vixen who returns home from boarding school to her French countryside home for Summer vacation. Like many of Breillat’s suffocating heroines, Alice is bored with her daily routine, understands the contradictions of her family life, and pines for some enigmatic fix by drifting off into heightened sexual fits of surrealism.

Breillat doesn’t mince the extreme imagery either, pushing Alice’s sexuality front and center so it’s unmistakably brazen and at times sensational. Alice bikes around the small town with her skirt up, flirts with older men by touching her privates, stalks an attractive young logger, and fights with her parents tooth and nail about her role as a daughter. These dalliances cause quite a stir in the town, but Alice’s parents end up caring more than the girl herself. But every action has a reaction, and with most Breillat’s films it’s the most minor moments that end up destroying the characters in the end.

The most disturbing element of A Very Young Girl might be Alice’s incredibly singular outlook on power, control, and ultimately manipulation. Breillat allows Alice to sway through scenes, part chameleon, part shark, scanning the shoreline for victims while also blending into the background. Her mere presence upsets the balance of communal stasis, and Breillat uses Alice to weed out the wolves in sheep’s clothing, those who watch from afar and both judge the provocateur and yearn for their undivided attention.

Unfortunately, Breillat can’t sustain the visceral power of the first half, and Alice’s experiences grow less fantastical and more realistic, depressing in the sense that conformity seems to be eroding her very soul from the inside out. A Very Young Girl provokes the audience into witnessing the emergence of a girl grasping at sexual straws in order to fill a gaping void. Breillat sees her heroine as both victim and aggressor, a great if not predictable foreshadowing of the more complex female forces to come.