If you have a chance this weekend, check out Gore Verbinski’s excellent animated western Rango opening wide around the country. Johnny Depp voices the titular thespian lizard who takes to the desert and finds his stoic calling in the old west. The scattered bits of surrealism and aesthetic influences of Leone, Peckinpah, and Dali are really inspired, and work wonderfully on the big screen.

A few weeks back I covered Will Canon’s ridiculous fraternity thriller Brotherhood for Slant, and I almost forgot about the review. The film was pretty awful, so maybe my very recent entry on the worst films of 2010 jogged the old memory.

Here’s an article that’s always fun to write. My film-savvy younger brother, my extremely patient lady, and I vigorously talk about this all year, watching every “bomb” we can get our hands on and discussing levels of suckery in order to fill out this cinematic void of a list. Sure, it’s a bit of a masochistic project, but you can’t deny tradition. I’ve been filling out a “Worst List” for years now, and with so much pooh out there, there’s more material than ever to consider. I decided to wait a few months into 2011 for some films to get released on DVD, ones that I felt might make the list. Boy were my instincts right on (I’m talking about you #1)! A few dishonorable mentions before we get started: Just Wright, The Runaways, Jolene, Marmaduke, The Fighter, Frozen, The Eclipse, Unthinkable, and Grownups barely missed the cut. Without further ado, the Worst Films of 2010.

1. Love and Other Drugs (dir. Edward Zwick) – Maybe the worst movie of the last decade. My hope in humanity diminished greatly watching this train wreck of incorrigible Oscar baiting (thankfully even the Academy didn’t bite), a film that shamelessly tries to mix comedy and social commentary and fails so badly neither even feels part of the same story. Gyllenhaal tries to be charming but comes across as relentlessly smug, while Hathaway looks completely lost in a ridiculously derivative plot that literally goes nowhere. Imagine the worst impulses of the romantic comedy mixing with the pretentious/self-righteous posturing of a “relevant” issue film. This is Up in the Air, re-imagined by Paul Haggis’ evil twin.

2. The Last Song (dir. Julie Anne Robinson) – As my boy Joel McHale would say, “It’s Miley!” I dare you to watch this umpteenth entry in the Nicolas Sparks/my dad is dying/I don’t want to but must fall in love with the wrong guy/bullshit.

3. City of Your Final Destination (dir. James Ivory) – Droll, monotonous, plodding, tiresome…yeah, I got nothing else. 2+ hours of rich people whining, populated by passive male characters and passive-aggressive females trying to transcend their suffering lives. Maybe this is one of those films “I’m too young to get”, but that excuse only goes so far. The outright melodramatic hackery on display can’t be denied.

4. Skyline (dirs. Colin and Greg Strause) – Laughably bad, inane, and clumsy. Really the worst genre film to come along since Battlefield Earth. This is almost worth watching for the mind-boggling stupid final scene, if you can get that far. Almost.

6. Dear John (dir. Lasse Hallstrom) & Letter’s to Juliet (dir. Gary Winick) – An Amanda Seyfried double-bill from hell. Each is terrible in their own way, but the former falls nicely in line with my #3 film’s analysis, while the latter is a special type of sun-drenched turd, shoving a faux-Shakespearean romance down our throat until we gag on the syrupy discharge.

7. The Kids Are All Right (dir. Lisa Cholodenko) – The most controversial choice on this list since it obtained a number of high-profile Oscar nominations, but this is bad Lifetime television posing as social comedy. There’s an arrogant quality to the performances, writing, and direction that not many critics have discussed, a smugness that permeates through every scene in disturbing ways. By the end, I hated each one of these people and didn’t care one ounce about their situation. That many people have found viable substance here is insane.

8. Legion (dir. Scott Charles Stewart) – I love action films, but not this much. Paul Bettany as a stoic angel with machine guns protecting an idiot human population from other angels. Enough said.

– Finally, just in case you were wondering, I did see the abysmal Twilight: Eclipse, but figured I’d leave that one alone because everyone knows it sucks, and those tweens won’t listen to me anyway. Until next year.

An early front-runner for Blu-ray of the year is Criterion’s high-definition transfer of Alexander Mackendrick’s masterpiece Sweet Smell of Success, a brazen, sweaty, and razor-sharp critique of American power lust. This film, not Citizen Kane, is the most prominent thematic precursor to Fincher’s The Social Network. My review can be found at Slant.

A strange duck, A Woman, a Gun, and a Noodle Shop strips the brooding Neo-noir conventions from the Coen’s Blood Simple and re-imagines them in a vibrantly colorful vision of Chinese period-piece deceit. The film might not be one of Zhang’s best, but it warrants a look from those devoted to his filmography. It’s often stunning, including the final (nearly silent) climax involving arrows, swords, and splintering wood. Check out my review at GreenCine.

If the eyes are a window to the soul, Gregg Araki’s Kaboom sees deep into a vibrant apocalyptic void no one can escape. His lustful young protagonists compete for control over contradicting perspectives, projecting a shifting landscape of uncertainty that is endlessly detailed yet incomplete. The post-modern world of mass communication seems to be ripping apart, with the facade of conventional college life (promiscuity, partying, the occasional study session) building a wall of self-indulgence around Araki’s lead character, Smith, a sexually confused student whose crumbling dreamscapes begin to overlap with his increasingly menacing daily routine. While the pieces to the film’s mysteries (including Smith’s complicated back story, a campus murder) grow stranger and more ambiguous, Araki becomes increasingly obsessed with shades of color. Bleached white dream sequences, close-ups on blue and brown pupils, and striking patterns of red within the costume design all point to an auteurist obsession with texture, an aesthetic pattern that eventually overwhelms all logic. In terms of plot, Kaboom might be intermittently silly and fleeting, but it produces an evocative tone that can’t be denied. Dramatic conversations and actions turn staunchly elliptical where most films would rely on plot devices to spin the story forward. Eventually Kaboom completely consumes itself (and Earth!), Araki envisioning a topsy-turvy head space for Smith and the rest of the horny collective to watch the world burn. In the end, you can never trust those lying eyes. 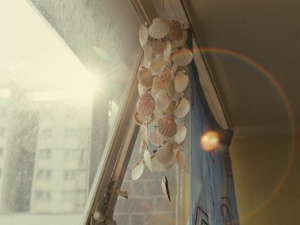 I got the opportunity to re-examine Andrea Arnold’s Fish Tank for the film’s Blu-ray release from Criterion (you can find my initial review here), and I’m glad I took a second look. While I still have deep reservations about the problematic third act, much of the film is a fascinating aesthetic glide through one girl’s duel with impending adulthood. Hypnotic imagery, Arnold’s ground level camera movement (influenced by the Dardennes I’m sure), and Katie Jarvis’ uncanny lead performance are all worth the price of admission, or in this case a rental of the stellar high-definition copy. Here’s hoping Arnold’s adaptation of Wuthering Heights will be at Cannes this year, because I just might get to see it.