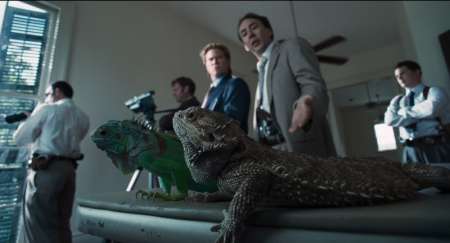 Various snakes slither through Werner Herzog’s Bad Lieutenant: Port of Call New Orleans, poisoning the already tainted post-Katrina locale with staggering potency and conviction. Both criminals and cops seamlessly conduct acts of robbery, murder, and corruption as means to always outlandishly desperate ends. Their venomous acts seep into the aesthetics as well, blurring the lines between reality and fantasy, causing a tonal uproar in even the most stagnant scenes. Herzog’s comedic treatment of the dark material only further complicates the narrative, making the film a strange and unruly ride.

Herzog’s dynamic and absurd loose remake of Abel Ferrara’s cult classic focuses on one viper in particular, Lt. Terence McDonagh, (Nicolas Cage) and his slow descent into personal and professional chaos. Perpetually popping pills and snorting coke, McDonagh shakes down pushers, steals from crime scenes and evidence lockers, and tortures witnesses, all in a delusional attempt to secure an imaginary justice while satisfying his deep personal cravings. McDonagh’s ambiguous quest is framed by a consistent inner struggle between selfish addiction and sacrificial action, a problematic dichotomy consistently battling with his tumultuous surroundings.

Herzog sees McDonagh as the ultimate junkie, and the film exists within a warped timeline of surreal logic paralleling his disjointed and fleeting point of view. Every act of violence, blatant moral compromise, or power trip feeds into this manipulative perspective, basically cunning attempts at surviving long enough to enjoy one more hit. McDonagh might be a cop on the surface, but inside he’s a devious mixture of vulnerability and guilt, more dangerous and vindictive than any of the hoods he’s investigating. In a world this fucked up, what really constitutes as evil?

The particularly thin story finds McDonagh investigating a multiple murder case, but Herzog intently reveals his protagonist’s growing insanity through blatant surreal asides. McDonagh’s sensory overload gives Herzog reason enough to radically deconstruct the conventional Detective genre through an aggressive play on expectations. Instead of police professionalism or elaborate chase scenes, randomness infects the narrative, specifically the appearance of exotic animals — lizards and alligators populating a space already crawling with human creatures. In one brilliant scene, McDonagh looks down at two iguanas on a coffee table, smiling as one creature violently snaps at the camera. In this instance, comedy defines even the most disturbing drifts of consciousness.

Cage’s McDonagh is a man with one hand down the rabbit hole and one on a life-preserver of misguided morality, unsure of which way to plunge headfirst. That Herzog is able to cohesively connect such a jarring collection of odd sequences is a minor miracle, but he’s always tiptoeing on a thin line between genius and idiocy. And this pattern inevitably turns exhausting as Herzog gloriously revels in his character’s multiple personalities, accents, and facial contortions while the world watches knee-deep in stagnant inaction. Cage’s performance borders on belligerent, but he creates layers of humanity underneath this character’s reviling decisions. Also, Herzog completely disavowing New Orleans as a timely location, relegating it to just another inner city slum. That is unless you qualify McDonagh’s breakdowns as an offhand reaction to Katrina (which they aren’t). These are just a few of the many contradictory representations Herzog flaunts but never fully develops.

Bad Lieutenant takes a simple police procedural and spins it into a devilish reflection of addiction, where the characters’ interior serpent bites from within, slowly eating them alive from the inside out. When Herzog does reveal the consequences of McDonagh’s plight, usually through a brief embrace or glance complimented by an absurd reaction, the film takes on a horrific resonance brimming with jarring emotions. But sometimes Herzog’s zest for the ridiculous hijacks the film, making it too easy to dismiss the entire affair offhand. Yet Bad Lieutenant is a diabolical black magic trick worth experiencing, a hallucinatory meltdown of male angst, violence, and soul dancing in response to a society on the brink of moral irrelevance. In this world, we all have a lucky crack pipe.