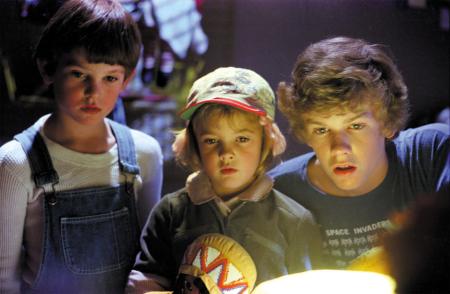 All of the recent Spielberg chatter inspired me to revisit one of the director’s earlier works. E.T. was the natural choice, mostly because it’s been more than a decade since my last viewing. I was immediately struck by the film’s organic examination of innocence and purity, a thematic cocktail that may feel sugary in this cynical day and age but really is something to cherish. I’d forgotten that E.T. is an unabashed kid flick, permanently rooted in the rush of emotions these young children experience on a moment to moment basis. The film asks the viewer to give in to its seamless rhythm, the children’s intoxicating conversations and the modes of communication they develop with E.T. For Spielberg, camaraderie and loyalty are more important than traditional plot devices.

E.T.‘s luminescent focus on wonderment and awe crescendos when Elliot looks over at E.T. slowly dying on the gurney, the boy’s eyes filling with the terror of imminent separation. This fascinating and draining moment encapsulates Spielberg’s motif of isolation and loneliness, a childhood fear he’s been examining throughout his filmography. A final note: Visually, much of E.T. is one long, fluid glide through exterior spaces, culminating in the fantastic bike sequence where federal agents chase Elliot et al. through a suburbia seemingly under permanent reconstruction.

Rigorous and uncompromising, Ben Wheatley’s Kill List is the kind of extreme genre filmmaking that will either make you squirm or swoon. I did a little of both. There’s plenty of undeniable precision and talent on display (especially Wheatley’s incredible ear for dialogue), and the film’s thematic underbelly always fascinates. The motif of rotting flesh and scraps is especially telling and grim, some kind of warped allegory to the economic malaise that is referenced a few times in passing.

Brutal violence is the only release in Kill List, yet the act itself only begets more ambiguity, an approach that ultimately culminates in the film’s ridiculously over the top ending. Still, the volatile camaraderie between the two leads (Neil Maskell and Michael Smiley) lends a certain human tragedy to their descent down hell’s rabbit hole. The performances alone are worth sitting through Kill List‘s sometimes inane narrative clues and foreshadowings. Wheatley’s previous film, the truly disturbing gangster/family saga Down Terrace, is a far more compact Molotov cocktail, yet Kill List shows Wheatley growing in ambition, even if that audacity is often grating to a fault.

In this, my first full calendar year of being professional film critic, I’ve been spoiled by cinematic excellence every step of the way. 2011 has indeed been an embarrassment of riches for any film lover, from the vast collection of foreign and independent titles that struck a lasting cord to even the few Hollywood offerings that resonated. I’ve tried to capture the rush of emotions in the prose below. Some of these capsules are comprised of previous thoughts reprinted simply because I can’t imagine expressing myself better at this point, and others contain fresh analysis. Enjoy and thanks for reading! 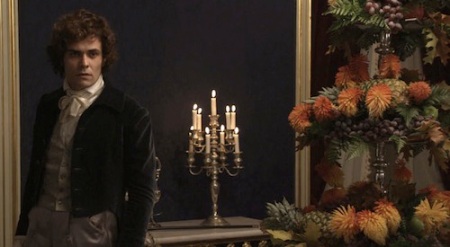 1. Mysteries of Lisbon / Raul Ruiz
Rarely does a cinematic experience swallow you whole, but Mysteries of Lisbon, maybe the closest any film has come to being an epic poem, does just that. Chilean director Raúl Ruiz, who passed away this year at the tender age of 70, injects his simmering passion play about hidden identities and repressed memories with a graceful kinetic rhythm, a sense of cyclical movement that allows an ornate 19th-century Portugal to become an ocean of unrequited love and tragedy. It’s a densely layered filmic landscape where textured interiors and sublime natural light surround an array of diverse characters—orphans, priests, soldiers, pirates, aristocrats—torn between emotional duress and philosophical enlightenment. The film’s demanding temporal and spatial aesthetic, captured by haunting long takes and overlapping audio, creates a narrative Rubik’s cube that keeps turning and twisting until each character has been aligned with their necessary fate. Yet despite its four-hour running time and laundry list of shape-shifting players, Mysteries of Lisbon is a breezy cinematic dream, a film that effortlessly mixes grand ideas (national trauma, historiography) with small emotional truths, ultimately revealing how one can perfectly mirror the other. END_OF_DOCUMENT_TOKEN_TO_BE_REPLACED

In the spirit of the Christmas, I offer you my favorite Holiday films over at SanDiego.com, from 1940’s The Shop Around the Corner to 2006’s Last Holiday. Happy Holidays to everyone and thanks for reading!

The Adventures of Tintin brings America’s ultimate blockbuster director, Steven Spielberg, back to his B-movie roots in glorious fashion. It’s the most fun you’ll have at the movies this Holiday season.

Jason Reitman’s films have always struck me as being smug. His indulgent and snarky Young Adult further proves that point.

It’s that time of year when Hollywood starts unleashing some serious Oscar bait. With that in mind, allow me to introduce the incredibly misguided biopic, My Week With Marilyn. At least Michelle Williams dives head first into her strangely affecting role as the tortured blond bombshell.