In this, my first full calendar year of being professional film critic, I’ve been spoiled by cinematic excellence every step of the way. 2011 has indeed been an embarrassment of riches for any film lover, from the vast collection of foreign and independent titles that struck a lasting cord to even the few Hollywood offerings that resonated. I’ve tried to capture the rush of emotions in the prose below. Some of these capsules are comprised of previous thoughts reprinted simply because I can’t imagine expressing myself better at this point, and others contain fresh analysis. Enjoy and thanks for reading!

1. Mysteries of Lisbon / Raul Ruiz
Rarely does a cinematic experience swallow you whole, but Mysteries of Lisbon, maybe the closest any film has come to being an epic poem, does just that. Chilean director Raúl Ruiz, who passed away this year at the tender age of 70, injects his simmering passion play about hidden identities and repressed memories with a graceful kinetic rhythm, a sense of cyclical movement that allows an ornate 19th-century Portugal to become an ocean of unrequited love and tragedy. It’s a densely layered filmic landscape where textured interiors and sublime natural light surround an array of diverse characters—orphans, priests, soldiers, pirates, aristocrats—torn between emotional duress and philosophical enlightenment. The film’s demanding temporal and spatial aesthetic, captured by haunting long takes and overlapping audio, creates a narrative Rubik’s cube that keeps turning and twisting until each character has been aligned with their necessary fate. Yet despite its four-hour running time and laundry list of shape-shifting players, Mysteries of Lisbon is a breezy cinematic dream, a film that effortlessly mixes grand ideas (national trauma, historiography) with small emotional truths, ultimately revealing how one can perfectly mirror the other.

2. Uncle Boonmee Who Can Recall His Past Lives / Apichatpong Weerasethakul
I saw this film at the 2010 San Diego Asian Film Festival, but its haunting resonance and mystical beauty remains staggeringly potent. Like The Tree of Life, Uncle Boonmee addresses big issues through the small relationships between life and death, nature and grace, all with an unflinching dedication to narrative ambiguity. The densely layered jungles of Thailand harbor many supernatural beings, all roaming the countryside haunting family members with memory and nostalgia. In turn, the secrets and lies of each character become metaphysical national anthems for Thailand’s dedication to religion and mythology.

3. The Tree of Life / Terrence Malick
Love it or hate it, Terrence Malick’s shape-shifting kaleidoscope of grand ideas and even bigger emotions is the year’s most ambitious film. In a world where formula usually reigns supreme, The Tree of Life is a true original, a massive statement on the overlapping aspects of history, identity, and generational angst. With superlative cinematography by the great Emmanuel Lubezki and meticulous production design by Jack Fisk, The Tree of Life spans centuries and continents with an effortless, personal ease. 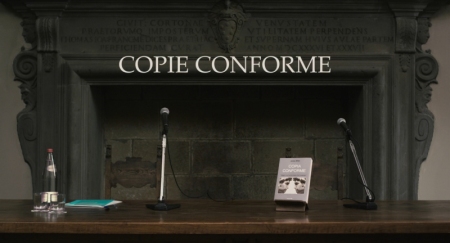 4. Certified Copy / Abbas Kiarostami
The flag of marriage flies at half-mast in Kiarostami’s beguiling Certified Copy, blowing in a deceptively calm breeze that reveals familiar memories posing as misleading hopes for nostalgia. A walk through a disintegrating family album, this awe-inspiring film is both deceptive and agile, setting up a simple conversation between two educated souls as an analogy for human disconnection. Author James Miller (William Shimell) has a keen knack for academic argument, and proves this skill throughout his time with Elle (Juliette Binoche), a beautiful admirer of his book on the perceived value of replica artwork. The two traverse the side streets and back alleys of Tuscany, dipping into deep philosophical conversations and visiting museums. Sunshine and shadows are equally on display as James and Elle duck into regional spaces so finely detailed it’s hard to imagine any more perfect place for a chat. That is until Kiarostami rips the rug out from under us, positioning the viewer right in the middle of a most uncomfortable realization. This narrative split defines Certified Copy as a diptych in contrasting forms of social expression, but also an orchestra of competing tones within rich word-driven set pieces. Their clever musings are initially so inquisitive and knowing, but these friendly volleys transition into deadly daggers, turning even the most pristine and romantic settings into contorted spaces of delusional grandeur. 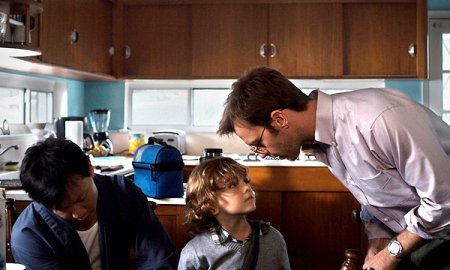 5. In the Family / Patrick Wang
This year saw the release of many impressive debut films, but they all feel weightless compared to Patrick Wang’s ambitious, compassionate, and devastating three-hour masterpiece. The story may seem small and contained on the surface: interior designer Joey (Wang) loses his partner Cody (Trevor St. John) in a car accident, which upends his paternal relationship with Cody’s young son and isolates him further from a surrogate family who were once so close. But there’s nothing minor about the brilliant way In the Family handles regional identity and societal contradictions, themes that are explored during dialogue-driven set pieces where humility and understanding can be found in every pause. With an Ozu-like attention to detail and silence, Wang establishes a palpable sincerity toward Joey’s disintegrating sense of family that never trivializes or moralizes his suffering or scorn. Instead, the film values conversation, the impact of waiting, and the power of optimism. Unlike most sentimental Hollywood schmaltz, In the Family earns its tears by spending long amounts of time with characters we care about, those who speak to each other and not at each other. Most notably, in Wang we have found a major talent, a chronicler of complex emotional collisions and reflections who expresses himself profoundly without resorting to theatrics.

6. A Separation / Asghar Farhadi
The film’s mastery of narrative progression doesn’t need specific detailing here, but its arc continuously surprises and devastates in equal measure. The incendiary political issues concerning Iran’s current repressive state are referenced slyly through the subtle clues in the story as opposed to grand symbolism or metaphor. In turn, themes of suffocating bureaucracy, gender division, and communal distrust aren’t politicized, but humanized, woven into the fabric of each spoken promise and unspoken betrayal. A Separation is ultimately a film of masterful reaction shots; its character’s faces speak volumes of subtext between the heated arguments and accusations often structuring the film’s most scathing moments. We see the longing stare of a lonely daughter, the panic of a woman spinning out of control, and the painful confession of man caught in a lie. The language of Farhadi’s film is caught in these deceptively small everyday moments, where resentment and reconciliation rest side-by-side.

7. Nostalgia For the Light / Patricio Guzmán
The present moment doesn’t exist in Patricio Guzmán’s bewitching documentary Nostalgia for the Light—only the ethereal flickering of past memories, traumas, and emotions. Here, discovery isn’t a process, but a burst of energy that occurs within a heightened state of remembrance, a subjective headspace often inspired by inanimate objects of the past, like an ancient whale’s bone or a gold transistor radio. These are primers for Guzmán’s examination of his own origins as a filmmaker and human being, his defining passions and thoughts. Yet Nostalgia for the Light is equally consumed by what has been repressed, what’s tragically hidden in plain sight. By intricately mapping personal experiences as layers of a larger national terrain, Guzmán becomes a kind of cinematic cartographer for Chilean history, not to mention a kindred spirit with his many diverse subjects. This connection is most palpable with the legion of astronomers who use gigantic telescopes to scan the translucent horizon high atop the famous Atacama Desert, where in some of the film’s indelible night shots it literally looks like you could reach out and touch the stars. 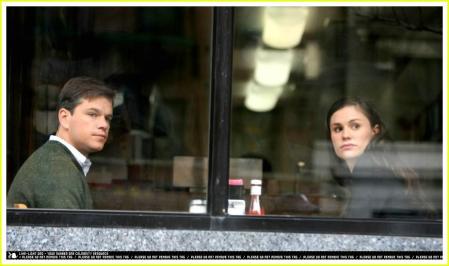 8. Margaret / Kenneth Lonergan
The brouhaha surrounding Margaret’s long delayed release is well documented online, so I won’t go into it further here. However, Kenneth Lonergan’s fractured drama about all kinds of collisions set in a bustling post 9/11 New York City is some kind of miracle. There’s stunning performances by J. Smith-Cameron and Anna Paquin as a mother and daughter whose long gestating emotional wounds reappear after physical tragedy strikes their daily routine. With it’s dense dialogue sequences and frayed editing style, Margaret is not an easy sell by any measure, but it’s one of the great films about trauma ever conceived and should be seen by any serious film lover.

9. Hugo / Martin Scorsese
“The movies are a gift,” says Hugo Cabret (Asa Butterfield) to new found friend, Isabelle (Chloe Grace Moretz), as he attempts to describe his transcendent first experience with motion pictures. This blissful exchange is all about common ground, the idea that two people can share in the anticipation of a heightened experience. It’s also one of the key moments in Martin Scorsese’s divine Hugo, the master American director’s first film shot using 3-D technology and a loving ode to the way we experience new forms of art. Fittingly, Hugo takes the relationship between spectator and memory quite seriously. But it’s not a great film merely because it celebrates the love of movies; it’s also the rare story whose characters desire an understanding of the inventions, history, mechanisms, and magic that defines the medium they cherish. In this sense, Hugo finds both it’s narrative threads and themes through the art of discovery, the demand for experimental expression.

10. Drive / Nicolas Winding Refn
The Driver (Ryan Gosling) with no name is a shark. Coldblooded, precise, and silent at the wheel, his hauntingly dead eyes scan the horizon predicting avenues of direction and escape. While physical movement is subtle, represented by the squeeze of a fist or a thrust of the gear stick, intense mental concentration is his way of the gun. Piercing through the Los Angeles concrete jungle of Nicolas Winding Refn’s Drive means existing within a closed-door genre universe ripe with references and cues, and Driver moves like a dorsal fin cutting through the water. The man is a perfect working machine (résumé: Hollywood stunt driver, mechanic, and getaway driver), and getting from point A to B is his only motivation.