The only Tony Scott film I can think of that successfully melds his shotgun bang aesthetics with potent, carefully observed human themes (guilt, remorse, revenge, longing, loneliness… the beat goes on). Watching the opening credit sequence, in which a ferry load of soldiers and their families are decimated by a titanic bomb blast, I couldn’t help but see Scott as a humanist, not as a showman. It’s strange to write this about such a director normally obsessed with surface visuals, but all the proof you need is in Denzel’s facial expressions, his brilliant mix of shock, sadness, and professional resolve. This might be one of the strangest and most beguiling Hollywood films ever, an example of hop-skip-and-a jump cinema that actually has something to say about the contradictions of fate.

The opening moments of Douglas Aarniokoski’s post-apocalyptic The Day are a veritable highlight reel of dystopic imagery: empty roads strewn with debris, forests darkened by fire, and shallow creeks muddied from years of pollution and erosion. Yet the calculated camera movement and menacing ambient silence gives this well-tread material an invigorating and dangerous feel. The threat of death feels real and all-consuming. As the film’s five roughneck heroes, armed with machetes, shotguns, and knives, make their somber march toward some unspoken destination, we understand their haunted lockstep as routine.

Like many great dramas, Christian Petzold’s Jerichow begins with a tense story already in motion. The film’s opening moments, brimming with silent glances, stoic facial expressions, and sudden bursts of rage, chart the climax of a particularly fascinating narrative thread about two old friends realizing their relationship has come to an end. Ultimately, it’s a 7-minute prologue that becomes a stunning microcosm for the deceit, betrayal, and guilt that will dominate the rest of the film.

Like a specter, the Holocaust eerily looms over The Matchmaker, always felt but rarely mentioned. People’s facial scars, physical deformities, and arm tattoos are the only concrete proof that this horrific chapter in our human history even occurred. No matter their mental or physical condition, most of the diverse Israeli characters in Avi Nesher’s drama refer to Germany as “there,” a purposefully vague descriptor that points to their belief that the Holocaust is better left forgotten. In turn, the act of collective denial allows trauma to trickle down from one generation to the next, unabated and undefined…

The films of Jean-Pierre and Luc Dardenne all depict characters arriving at forked paths, having to choose between apprenticeship and rebellion, the promise of stability and growth within a predetermined system and a certain feral, almost instinctual resistance to the social and economic contradictions of rural living. No matter the narrative or milieu, both experiences reveal contrasting forms of survival with wildly different consequences and outcomes. This tense thematic dichotomy bleeds through the Dardenne brothers’ stifling handheld camera aesthetic, one where off-screen sound and jarring physical movement strictly defines the borders of the modern world. Ultimately, their films delicately balance chaos and order, unspoken tenuousness and silent expression. 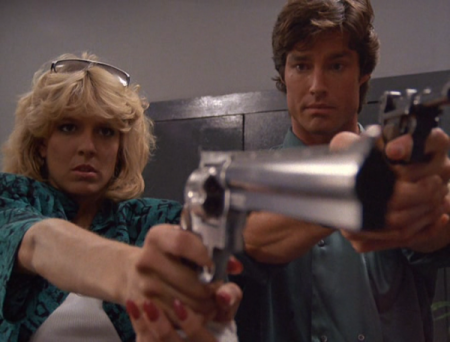 Legendary B-movie writer/producer/director Andy Sidaris mastered the art of turning picture perfect postcards into sweaty soft-core cinema. His lush widescreen images of natural beauty, mostly filmed on the various islands of Hawaii, are mere backgrounds for busty blondes in swimsuits toting machine guns and grenade launchers. Mixing outlandish violence, smooth sex scenes, and classic one-liners that would make Mr. Schwarzeneger jealous, Sidaris’ genre films cast Playboy Playmates as secret agents and spies caught up in lethal missions, albeit assignments that weren’t too dangerous for a sudden left turn into a night of delirious carnal pleasures. At their best, Sidaris’ films offer one implausible plot twist and seedy scenario after another, a volatile combination that ultimately gives these lowbrow action films a lasting identity…

– Full Review at Not Coming to a Theater Near You

One moment of quiet solitude stands out amongst all the kinetic action sequences and globetrotting theatrics that have defined the Jason Bourne trilogy up to this point: a man’s lifeless body floats in the ocean, captured in low angle by a submerged camera and backlit by brilliant moonlight. It’s a shot that represents the fragility of this nimble and powerful character, who so often seems superhuman. The Bourne Legacy, the fourth installment in the series, begins with this very same pictorial, except the image feels frozen in time, even more somber and poetic. As if to linger on the franchise’s past before sending it in a new direction, director Tony Gilroy (who has had a hand in scripting each Bourne) references the seemingly lifeless body before revealing it to be very much alive, a shirtless swimmer in mid-stroke.