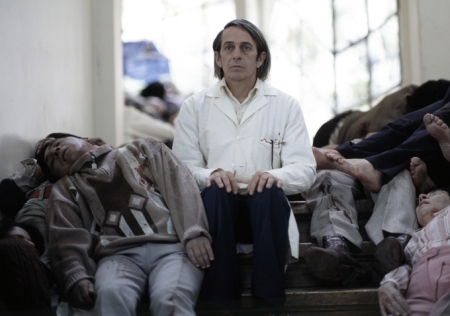 Pablo Larraín uses the aesthetics of art cinema to unearth the buried traumas of Chile’s horrifying past. Unlike his more ethereal compatriot Patricio Guzmán, he deals in antiseptic period-piece detail, black humor, and ghostly characterizations, all to capture the commonplace, lived-in, and normal nature of a nation’s collective nightmare. Post Mortem, the second in Larraín’s trilogy examining the lasting effects of the 1973 coup d’état on Chilean life, is an especially nasty affair, utilizing off-screen sound and violence to express the omniscient qualities of terror. If the power of suggestion allows Post Mortem to imagine a grisly picture of bloodshed beyond the frame, the static compositions of corpses piled in rows and houses decimated by gunfire brings home the immediacy of the coup’s carnage without resorting to theatrics.