In this postmodern acid wash nightmare called 21st century America, some of us no longer have the ability to register rock bottom. We just spiral deeper into the neon abyss, documenting our own demise by way of pop culture and ego and delusion. Complex emotion is meaningless. The momentum of deceit is all encompassing. Those contemplating the limits of excess are either delusional or weak, unnecessary, disposable. As a result, the Culture teaches us to be cold, unfeeling, and obsessive to the pursuit of nothing else but those boobies y’all. We are what we lust after, and we are lusting after self-destruction. Mission Accomplished.

Nimbleness is next to godliness in the action films of Jon M. Chu. Those who can seamlessly glide, bend, and contort take control of time and space, creating their own gravitational pull. As a result, they challenge the limits of what a body can do, helping to realize personal identity through harmonized movement. It’s a natural-born talent that can produce infinite kinetic possibilities on screen. And us mortals simply watch in awe from the sidelines.

Step Up 3D is Chu’s cinema-of-agility at its most joyous peak. The nubile New Yorkers from that pop musical literally fly through the air at times, earthbound constellations illuminating the power of collective dexterity. While the film’s meager plot consistently borders on absurd melodrama, its riveting dance sequences are mini-explosions of color, texture, and depth that allow Chu’s eye for cinematic pacing and rhythm to emerge. “Dance has vocabulary,” one character muses, pinpointing the bridge between action and expression that Chu cherishes. But there’s also a certain level of aggression to some of these performances, even though they unfold within a cinematic world that has very little bite. One human gazelle is even labeled a “ninja” after jumping through a small hotdog stand during a chase scene in Central Park, a personification of the seemingly contradictory combo of force and finesse.

Hints of the same visual fluidity can also be found in Chu’s G.I. Joe: Retaliation, albeit the entanglement of bodies is much more overt; gun battles and martial arts stand in for the mesmerizing musical standoffs in Step Up 3D. A mega-budget sequel to the 2009’s G.I. Joe: The Rise of the Cobra, which was based on the popular Hasbro toy line from the 1980s, Retaliationfinds Chu attempting to evolve as a director on a grander scale. In the cartoonish world of the film, where the titular “Joes” defend American democracy against super villains hell bent on global domination, movement no longer represents ideological transcendence, but messy destruction. Instead of long takes, which are lovingly utilized in Step Up 3D, Chu opts for increasing volatility in the editing room. The film’s cut-happy style immediately proves a jarring shift in form, as fragmentation has replaced grace.

Once again, Chu’s direction falters whenever plot takes center stage. The opening act is waterlogged with tedious exposition and comedic banter between Duke (Channing Tatum) and Roadblock (Dwayne Johnson), leaders of the G.I. Joe special-operations unit tasked with retrieving a stolen nuclear bomb from war-torn Pakistan. When their mission goes awry, leaving all but three of the Joes terminated, Retaliation gets bogged down with plot, jumping back and forth between the surviving heroes and the vipers of Cobra Command who’ve taken control of the U.S. presidency via a shape-shifting imposter.

The narrative bloat doesn’t matter in the least though, as the extreme verbal posturing by either side simply acts as connective tissue between the blunderbuss action scenes. But even here, where one expects Chu to shine given the chance, the combat sequences are mostly flavorless, failing to capture the momentum or immediacy of Step Up 3D‘s best moments. That is with the exception of one audacious set piece between warring factions of ninja high up on the mountain peaks of Japan. As Snake Eyes (Ray Park) and Jinx (Elodie Yung) scale treacherous ground to kidnap the infamous swordsman Storm Shadow (Byung-hun Lee) from a snowy chateau, the battle eventually spills out onto the open cliff faces in glorious fashion. Propelling downward like birds in freefall, the ninjas primed for battle crisscross each other’s paths wielding katana swords with effortless precision. Here, Chu finally expands the frame, capturing the daredevil theatrics in wide angle without devolving into schizophrenic montage. For a moment, despite the violence and death, it seems like these warriors are engaged in some kind of epic dance off. Instead of the splashes of water and bursts of chalk that hypnotically pepper Step Up 3D‘s mise-en-scène, there’s the clanging of metal and swooshing sound of sleek bodies careening through space. It’s poetry in high-speed motion.

Other flashes of Chu’s potential as an action filmmaker emerge; a sequence where Firefly (Ray Stevenson) unleashes a squadron of his explosive drone namesakes onto an unsuspecting high-security prison is beautiful for its bright hints of LED color and constantly changing directionality. Yet it’s hard not to feel like Chu’s more dangerous and improvisational inclinations were either held back or repressed by the production itself. Chu’s cinema is far more powerful when the action is multifaceted, instinctual, and captured from a distance, allowing for multiple planes of activity to occur simultaneously, whether the movement is harmonic or confrontational. WithRetaliation, the young auteur seems lost amid so much narrative dead weight. It’s not surprising then that Chu feels most at home filming gliding ninjas tap dancing across the frame. Theirs is a freedom from gravity that makes perfect sense. 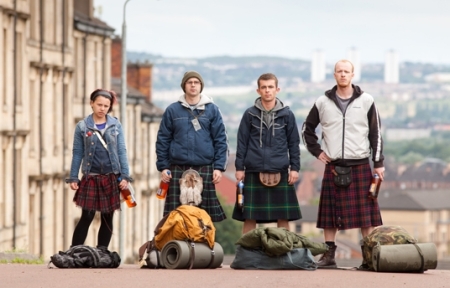 Ken Loach has long oscillated between crafting leftist historiographies and kitchen-sink comedies, all defined by the working class’s struggle against government corruption and social inequality. Recently, the British filmmaker has shown a predilection for overt ideological preachiness, even more so than in his early, grittier works. Perhaps mercifully, his latest film, The Angels’ Share, a breezy scribble about lowlife redemption and drunken buffoonery, isn’t so much heavy-handed as it is charmingly weightless.

In the film’s opening montage, a series of scraggly defendants separately stand before a magistrate, awaiting sentencing for crimes like public drunkenness, brawling, and petty larceny. Speeches from the defense and prosecution paint different backstories, calling into question whether or not each is a scoundrel or merely misunderstood. Only time will tell, and Loach has a fun time playing with the moral ambiguity on display, especially in regard to the volatile hooligan Robbie (Paul Brannigan), who’s incarcerated for the latest in a long line of fistfights. As the camera lingers on each of the defendants’ faces, they squirm and fidget, genuinely concerned about the future while their crimes are recounted in droll verbal fashion by the snooty court. Not only does this prologue establish the sometimes hilarious, sometimes dark actions of the lead players, it proves that Loach can express his interest in social/class juxtapositions by way of a lively cinematic style.

Unfortunately, The Angels’ Share quickly devolves into ho-hum convention. It doesn’t take long for Robbie and the other miscreants to meet-cute during a court-mandated work program that has them picking up trash and painting over graffiti. They mindlessly band together over a mutual appreciation for whisky drinking and production after their group leader, Harry (John Henshaw), leads an impromptu field trip to a local distillery. Here, Loach focuses more on hapless friendships rather than the social ills that seem to be keeping the characters down. Early plot threads like Robbie’s conflict with his pregnant girlfriend’s father and a rolling feud with another Glasgow family are thrown by the wayside in favor of chill sessions between him and his newfound sipping buddies. Eventually, an absolutely asinine heist subplot leads Robbie and his posse into a daring plot to steal priceless whisky from an age-old casket.

Ideologically, the film has little on its mind. Robbie and his ilk are simple entrepreneurs looking to rise out of the economic cellar by way of an Ocean’s Eleven-grade scheme. Focusing on the capitalistic tendencies of cash-strapped characters is a strange fit for the left-leaning Loach, and as a result the final act feels forced when the film becomes a mainstream rags-to-riches fairy tale. Strangely, even more so than with his previous comedy, Looking for Eric, Loach seems to be moving toward a more Hawksian outlook regarding the overlap between professional and personal relationships. This would be a good thing if Loach’s characters actually felt strongly about the procedures of a given tradecraft. Instead, The Angels’ Share is like some hybrid born from the loins of Sideways and The Full Monty, reveling in a brand of cheeky camaraderie that feels ultimately cheap, one that simply cherishes a dimwitted euphoric passion for sipping booze and talking shit.

The toxicity of emotional stagnation is all encompassing. It seeps from the ground, drifts like dust in the air, lingers on the wind’s breath, infecting us all no matter how hard we try to avoid it. “I’d hoped to never love again…” but is there another conceivable path? It starts from a place of instinctual bliss and slowly evolves toward an unthinkably silent, confused state of indecision and panic, or everyday life. Malick is once again measuring all things great and small through a cinema of vibrations and tones, and he’s created a massive/miniature tidal wave of momentum, filling the gaps where “narrative” should be with titanic images of lived experience devoid of wordplay. Heartache and joy, rage and confusion are no longer internal feelings, but external prayers sent outward for those around us to decipher and engage. Some people are more attuned to understanding than others.

This is a film of confessions and releases, towering industrial castles and deep horizons. A spinning glass orb, a spiraling camera that never stops swirling in harmony with the birds in the sky and the horses on the ground. Choosing to commit blissfully is the highest achievement, while choosing to commit out of convenience or necessity is a breach of all that is natural and right. We all dance around each other, pacing from one end of the frame to other, waiting to touch, hoping to graze against skin, yet afraid of realizing this sustained connection when it all happens gracefully enough. Eventually, after the fear and doubt and lust and desire and sadness subside, one final truth is revealed: we are ourselves at all times, but we are so much more than ourselves when we are in the right place, at the right time, with the right frame of mind, enjoying it all at once. That is transcendence, and sometimes, it does happen.