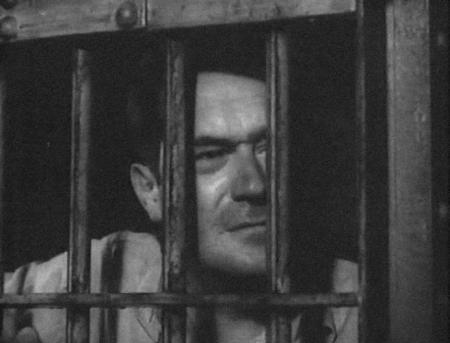 The phrase “a friend in need is a friend indeed” takes on a darkly cynical meaning in Cy Endfield’s harrowing film noir, Try and Get Me. To trust anyone and anything is to be inherently deceived. This applies to Endfield’s treatment of individual relationships, public institutions like the print media, and even the most basic considerations of modern “civilized” society. Fittingly, the film envisions small town America as an ideologically hollow place deprived of economic confidence and brimming with repressed anger. Here, the facade of camaraderie and masculinity can be ripped away in an instant causing irreparable physical and emotional damage. This is Fritz Lang territory, and not surprisingly Try and Get Me is based on the same actual event that inspired the director’s masterpiece, Fury.

Full review published at Not Coming to a Theater Near You. 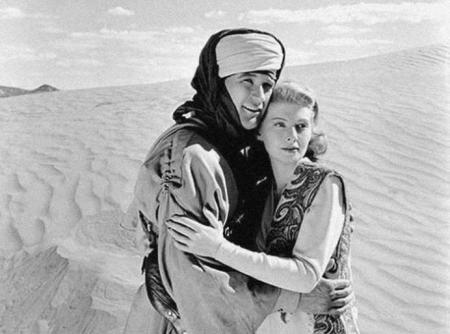 The introductions at TCM Classic Film Festival are often the most revealing portion of the filmgoing experience. So it wasn’t a good sign when, during his pre-screening speech, iconic television host Robert Osborne spoke this fateful line of Robert Florey’s 1943 version ofThe Desert Song, a film that hasn’t seen the light of day for 50 years due to rights issues: “It’s not a great movie, but it’s a fun one.” Well, he was half right. Released during the heart of WWII, this choppy adventure/musical is most interesting when seen as a blatant guilt trip made by Hollywood to remind European pacifists of their indifference during the swelling Nazi threat in the mid-to-late 1930s. As a classic genre film, it’s an inconsistent and inert Casablanca clone.

Full review at Not Coming to a Theater Near You.

First there was darkness. Then a spark of remembrance. His synapses begin to fire out of control, so rapidly in fact that patches of the flat world peel away, revealing glimmers of subjective memory and history that exist in a perpetual vacuum of intense feeling. Whether or not these images are trustworthy remains a moot point; their very creation is a sign of tenacity and a will to live.

Such bright cinematic flickers allow every moment, no matter how mundane or false, no matter how monstrous or devastating, a sense of wondrous momentum that will never stop overlapping. To stop would be the equivalent of fading to black forever, and he has so much more to see.

Everyone is referencing this as the Indian heir to THE GODFATHER but I see the pace and aggressive editing/pop music cues of THE DEPARTED, just expanded and prolonged over decades. What a furious masterpiece of genre extravagance, a history defined by the art (and bungling) of assassinations, marriages, funerals, chases, ceremonies, campaigns, friendships, love-making, and countless other rituals. It may be splattered with brutal violence, acts that initially seem like necessary evils. “I killed them so I could live.”

But all of the gore and dismemberment, the head shots and knife wounds, they are representative of an entire genre living inside its own head. The dream, the fantasy of being a gangster, has real life consequences (a past history of retribution and death) but also psychological ripples that span generations and delude the young into thinking they can avenge the old and get away with it. There’s no escape from your own warped sense of self. This quote sums up everything: “Every fucker’s got his own movie playing inside his head.”

Texas cattle baron Bick Benedict and Maryland debutante Leslie Lynnton fall in love during their first quarrel. The disagreement revolves around nothing less than the historical and cultural sanctity of the Lone Star State itself, specifically its troubling origins involving the prolonged and violent displacement of Mexicans in favor of white settlers. Heavy subject matter for two doe-eyed young characters who’ve been shooting knowing glances at each other for an entire day. What’s most interesting about their frank war of words is that Leslie’s thunderclap of criticism stems not from Eastern judgement or resentment, but her seemingly organic attraction to the tall and studly rancher visiting her family’s expansive rural abode to purchase a prized black stallion. It’s a form of flirting that also acts as progressivism, challenging Bick to consider his own social identity and personal values while also arousing his romantic interest. Needless to say, the dude is knocked out cold, simultaneously head over and heels and enraged.

Full Review at Not Coming to a Theater Near You.

Film noir specializes in depictions of the slow and seamless suffocation of human life. The victims: morally corrupt archetypes tormented and transfixed by the inevitability of their own demise. Simply put, these characters are the walking dead of cinema. Every breath they take spells finality, their every action a tightening of a vice. As if to jarringly reference this classic genre structure, Amy Seimetz’s harrowing feature debut, Sun Don’t Shine, begins with a hysterical young woman suddenly rising into frame and gasping for air.

The wheezing femme is Crystal (Kate Lyn Sheil), a flimsy waif knee-deep in a messy fisticuffs with her lover, Leo (Kentucker Audley). She seems to be more possessed than angry, and the stiflingly hot backwoods-Florida setting makes their violent tussle seem all the more primitive. The two roll around in mud and puddles like enraged animals, yelling at each other over some unknown reason. While the motivation for the brawl remains somewhat obscure, the characters’ weathered facial expressions suggest that whatever caused the disagreement is potentially damning. This ambiguity sets a beguiling tone that’s only amplified by the messy handheld aesthetic and the humid atmosphere.

After the initial throw-down, it quickly becomes clear that Crystal and Leo are engaged in a desperate attempt to dump a dead body and establish separate alibis in the process. The shady scenario creates a tense emotional landscape that consistently pits the two leads against each other and unsuspecting civilians who become embroiled in their plot by chance. One anxious sequence finds the couple on the side of the highway waiting for their overheated car to cool down. When a good samaritan stops and insists on helping, Leo unsuccessfully tries to talk his way out of the situation. Finally, after the passerby begins to share a strange story about a dog trapped inside a hot car, Leo gets fed up with the niceties and shoots the verbose man a razor-sharp death glare. Sun Don’t Shine specializes in that brand of unspoken threat.

Stylistic echoes of Terrence Malick’s Badlands can be found in the fluttering xylophone score and the languishing tenor of the characters’ wispy dialogue. Yet Seimetz doesn’t envision her protagonists as psychopathic killers or lyrical ciphers; Crystal and Leo are terribly misguided but relatively sane people linked only by their mutual hysteria. They have dreams for the future, even if there’s no way for their fantasies to come true. (Crystal often speaks of sharing a house with Leo and her daughter, the trio existing in a perfectly realized state of domestication.) Interestingly, the only residence they visit is owned by a bar floozy who becomes a key figure in Leo’s alibi plan. As Crystal tries on the woman’s slinky clothes and rummages through her tacky belongings, she appears confused and angered, finally enraging Leo to the point where he once again acts out violently (this time sexually). The very space that should represent comfort feels entirely alien and even causes further trauma.

In keeping with noir tradition, Sun Don’t Shine slithers along toward a fatalistic conclusion of double crosses and epic fails set in the deep swamps of the Everglades. Except Seimetz sees such plot beats as secondary to the overall mood of the film. It’s not about what these characters are doing or even why, but the forlorn and asphyxiating vibe of their very existence, the way their physical appearance reflects the film’s overarching theme of emotional and physical panic. Dampness weighs down Crystals matted hair throughout, while sweat often rests heavily on Leo’s brow, both a product of an unflinching sun that won’t quit beating down on them. Unlike most modern noir films, Seimetz’s intoxicating slice of genre revisionism earns its “neo” prefix, envisioning a brightly sinister world where desperation is the new normal.

In this postmodern acid wash nightmare called 21st century America, some of us no longer have the ability to register rock bottom. We just spiral deeper into the neon abyss, documenting our own demise by way of pop culture and ego and delusion. Complex emotion is meaningless. The momentum of deceit is all encompassing. Those contemplating the limits of excess are either delusional or weak, unnecessary, disposable. As a result, the Culture teaches us to be cold, unfeeling, and obsessive to the pursuit of nothing else but those boobies y’all. We are what we lust after, and we are lusting after self-destruction. Mission Accomplished.