“All I need is a little work,” says traumatized secret agent Harry Hannan (Roy Scheider) to his worried psychologist in the opening moments of Jonathan Demme’s Last Embrace. Coming on the heals of his wife’s brutal murder and his own three-month stay in a sanitarium, it’s a cocky and dismissive sentiment that echoes L.B. Jefferies presumptive attitude at the beginning of Alfred Hitchcock’s Rear Window. Both men see their professions—the former a spy for some shady government outfit, the latter an extreme photographer—as an escape hatch from the emotional repression building up inside.

Full Review for The L Magazine

Just what I needed… a masterpiece. Expect something of merit on this film later in the year, and a big announcement to go along with it.

When I tweeted on New Years Eve that Alan J. Pakula’s The Parallax View would be my final film of 2011, friend and filmmaker Alejandro Adams responded, “Pakula in the 1970s is America.” I can’t get this idea out of my head. Between The Parallax View and All the President’s Men, Pakula envisions American corruption as a pervasive, festering rot nearly invisible to the common man, an omniscient force beyond the grasp of the everyday citizen. It only appears for a moment, in the flash of a photograph or the shadow in a dark corner. Plausible notions of good and evil do not matter here, simply because the ideology of corruption has taken over completely, operating on a level where morality and humanity no longer function as viable options. How do we explore the truth when the very essence of American identity is permanently and potently askew?

Warren Beatty’s Joseph Frady, a loose cannon journalist who attempts to infiltrate a corporation carrying out assassinations with homegrown killers, functions as an interestingly active character, someone driven by the need to pull back the veil of American conspiracy theories. That he not only fails, but falls into a perfectly calibrated trap designed by a puppet-master he can’t even fathom, is the film’s most devastating and salient point. I can’t shake how potently Pakula meshes repeating sound effects, interior long shots, and bits of silence in The Parallax View‘s final segment. The entire sequence seems to take place in a gigantic metallic tomb, the only color coming from the gigantic sign mosaic of Senator Hammond’s face, which aptly transforms into other caricatures of past presidents.  It’s like a slide show of an American history that was never real in the first place. 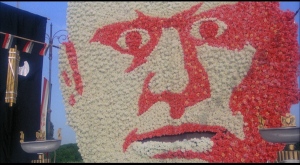 Criterion improves on their previous release of Amarcord with a nice Blu-ray disc, which I had the pleasure of reviewing for Slant. Not my favorite Fellini by a long shot (that honor would go to La Strada or Nights of Cabiria), but still fascinating for many reasons. Multiple viewings really help clarify what Fellini’s trying to accomplish with this strange mosaic of vibrant colors, emotional outbursts, rampant sexuality, and brutal fascism.

Believe it or not, I hadn’t seen I Spit on Your Grave until recently. Despite its reputation, I wasn’t prepared for the level of discomfort this film produces. There are so many interesting things going on here, both socially and cinematically,  and I touch on many of them in my Blu-ray review of this landmark horror film at Slant. 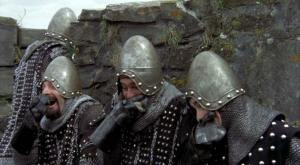 Not Coming to a Theater Near You is currently running a superb feature called “Blind Spots” where each writer reviews a canonical film that, for whatever reason, the individual has unforgivably never seen.

For a multitude of reasons, I chose Monty Python and the Holy Grail and the end result is part confessional, part analytical essay dealing with the ubiquity of film “quoting”.

Also, the daisy chain publishing structure is really something special, with each review prefaced by a short piece from a different writer who has already seen the film, kind of a personalized introduction to contextualize the work’s iconic status. In a strange twist of fate, my introduction to Chinatown leads the way for one of my good friendo’s, Michael Nordine, whose wonderfully honest and meaty examination of Polanski’s masterpiece represents the themes of this feature perfectly. Make sure to read them all.

“It’s still not about anything.” The stubborn last words of private investigators Frank Hickey (Robert Culp) and Al Boggs (Bill Cosby) splash ice-cold water on the grizzled face of the detective genre they represent. Despite a miraculous investigative victory over dangerous men with murderous intentions, downtrodden Boggs still can’t muster any optimism when he and his emotionally broken partner walk off into the sunset. Considering the physical and psychological toll their pursuit for truth has taken, it’s hard not to understand their reasons for begrudging traditionally heroic delusions of grandeur.

Hickey and Boggs, more a cinematic tombstone than a billboard, takes the lasting genre foundation established by Huston, Lang, Hitchcock et. Al. and gives it a backhanded slap to the face, turning the whole universe upside down until nothing is sacred and everything is unforgiving. Each layer of the onion represents a different perspective, a new world spinning out of control. Hickey’s attempts at family structure are forced, then destroyed, while Boggs has already given in to the emotional indifference plaguing every other character. Friendly banter between men remains the only respite from the harsh realities of pain and disappointment, and even that fails to document specific moments of transition.

There’s a crippling sense of space in Hickey and Boggs that permeates through each aesthetic element. As directed by Culp, the film feels jam-packed with bodies during interior shots, and isolated and barren in specific exterior set pieces. A seedy dive bar has very little room to breath, only enough for the camera to fluidly capture Boggs’ attempt to convince Hickey of their professional worth. Yet the epic belly of the Los Angeles Coliseum feels vast and endless, with heroes and criminals alike waiting on separate levels of the arena for the action to set them in motion. As each body peeks out from separate cavernous entry ways, the entire space feels like a gigantic ant hill ready to explode with activity. That this brilliantly staged action scene resolves nothing proves once again that Hickey and Boggs is an increasingly rapid whirlpool of failed cause and effect.

The ragged and deteriorating milieu of Hickey and Boggs reminds of Michael Mann’s criminal alternate realities, where professionals glide under the surface of everyday life by subverting notions of good and evil. But unlike Mann, Culp brilliantly constructs unforgiving dark scenarios in prime daylight, where marks, scars, and wounds of all kinds are easier to recognize. The final sequence on a sunny Los Angeles beach is a prime example of mayhem juxtaposed with unwitting reality. As a helicopter crashes, multiple people are killed, and chaos erupts, Culp cuts to a wide shot and reveals people enjoying a nice day on the sand a mere jog away. If there was ever any doubt to Hickey and Boggs’ isolation, this moment puts the question to rest.

Not surprisingly, Hickey and Boggs is more about creating questions than answering them. The performances, the narrative, even the cinematography contain a rightfully incomplete feel, proving that any form of heroic closure is a thing of the past. Currency is measured in sacrifice and compromise, and by the end these men walk away from the natural world together, at odds with anything resembling hope. And honesty, how can we blame them for doing so?

Error: Twitter did not respond. Please wait a few minutes and refresh this page.