Relentless, eye-gouging mise-en-scene. Paints the entire world as a flickering lightbulb, consistently unpredictable and always threatening to extinguish. Climactic gunfight far more coherent and effective than I remember. Narrative is purposefully ludicrous, constructed to hide the economic concerns/motivations of fringe characters and subplots, the real heroes of this film. Still, a part of me hates DOMINO because Scott relishes his own stylistic show-boating over character and theme.

For my fourth installment of “Meshes” over at the great streaming video/film criticism site Fandor, I address the complexities of friendship in Alexander Payne’s Sideways and Kelly Reichardt’s Old Joy.

Exciting news! I’m writing a new image essay column entitled “Meshes” for Kevin B. Lee’s excellent Keyframe Blog at Fandor. On a monthly basis, I’ll pick two films from different decades and examine how they stylistically and thematically overlap, using stills from each to juxtapose my thoughts.

My first entry highlights the aesthetic relationship between Miranda July and Maya Deren and two of their most well-know films. Meshes #1. 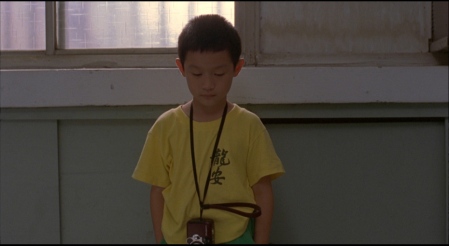 Edward Yang is one of my favorite filmmakers, so it was a pleasure reviewing his last film, Yi Yi (A One and a Two) for the Criterion Blu-ray release. This is one of those films I could watch endlessly, and even at three hours it feels swift. Sublime, warm, melancholy, and honest. You can find my review at Slant.

I had a sort of spiritual awakening watching The Actuality Dramas of Allan King, the new indispensable Criterion Eclipse box set containing five films that represent the wide-ranging scope of the Canadian filmmaker’s epic non-fiction career. Each film displays King’s genuine and generous humanity for human subjects on the fringes of society. King’s is a cinema of watching, waiting, and finally understanding the complexities of subjects like trauma, aging, marriage, and death. When taken as a collective piece of art, these films are nothing short of astounding. My review can be found at Slant Magazine.

Jonathan Demme’s scathing remake of The Manchurian Candidate is one of those rare films that gets better with age, growing more politically poignant with each exposed cover-up, corrupt politician, and devastating corporate malfeasance. Upon it’s 2004 release, the film seemed too paranoid, maybe even loony for digging so relentlessly into the wide-ranging corruption choking democracy in the post-9/11 Bush-age. Now, Demme’s dynamic and often brilliant thriller feels like one of the most relevant films of the last decade, a diabolical examination of a cracking national ideology that’s not paranoid enough.

From the waving American flag pushing the opening credits into oblivion, Demme positions devoted but conflicted Army Officer Ben Marco (Denzel Washington) on the fringes of disjointed perception and horrifying reality. Marco’s quest to find the truth is more about alleviating his own interior monologue than unveiling an international act of treason, but the evolution of his momentum inevitably begins to represent a growing national outrage. Ideological symbols and political platforms construct a distrustful landscape brimming with faux nationalism, shunning the American everyman in favor of global power. The razor-sharp pacing, the nuanced mirror performances by Washington and Liev Schreiber, and Demme’s schizophrenically reflective mise-en-scene organically feed into Tak Fujimoto’s river of sharp hues, creating a cinematic stained-glass window awash in menacing red, white, and blues.

The Manchurian Candidate confronts the very essence of what it means to be a conflicted American in the modern age, the varying degrees of devotion to country and self and the greedy capitalistic center controlling us all. But Demme’s film isn’t anti-capitalism or anti-government, just pro-justice. The Manchurian Candidate is one of the few genuinely entertaining and sophisticated Hollywood films that is also a political manifesto on corporate greed and manipulation, a dual level for those willing to measure morality on film. But beneath the technical genius lies a brimming anger for the smug indifference of those willing and able to live in a selfish fantasy of their own design, a veritable Candyland hallowed by the real “evildoers”. For this telling dichotomy, Demme’s textural powder keg is nothing short of revelatory.