Bong Joon-ho’s Mother begins with a strange slow dance performed by an unnamed middle-aged woman (Hye-ja-kim), an improvised solitary glide up a grassy knoll. But this fleeting bout of surface inspiration cuts to a dire sight, a dimly lit medium shot of the dancer now shrouded in darkness staring deeply into the camera. This stark juxtaposition foreshadows a lengthy timeline of suffering, where repressed memories breed new traumas, forming an intricate procedural of delusions in the process. This maternal spider weaves her web with unconditional love.

When her handicapped son Yoon Do-joon (Bin Won) gets accused of murder, Mother goes to great lengths to prove him innocent, and her investigation unearths some nasty skeletons. But her extreme  worry begins before the crime itself, and long before the narrative starts. It’s what defines their relationship, the essence of each character’s fragmented view of reality. Perception is a dangerous beast, especially when dealing with such extreme emotional reactions, and Mother’s very subjective journey confronts demons of all kind.

As with his other films, Bong spins genres and tones seamlessly, mixing and matching until each dynamic scene reveals a different monster for every occasion. With Mother, time and doubt erodes all sense of self, and the truth only makes matters worse. This dedication of slow suffering makes Mother a distant cousin of Memories of Murder, Bong’s masterpiece about the failure of state institutions in the face of unseen evil. But where that films oozes with narrative and genre subversion, Mother turns into a singular exploration of pain, watching the layers of craziness produce long bouts of extreme heartache. What Mother lacks in ambition it makes up for in uncomfortable seediness.

Bong masterfully builds scenes around dirty little secrets. He crafts his films around the struggle between interior and exterior horror. By the end of Mother, this investigation of innocence turns into a familial requiem, the initial dance of freedom proving to be something far more disturbing – an admission that ignorance is indeed bliss.

While Pulse uses Tokyo as a disjointed spatial metaphor riddled with gaps and hidden rooms, this omnibus film sees Japan’s megalopolis as a fantastical and quirky environment harboring characters catapulted into the public forum by societal concerns and personal weaknesses. Michel Gondry once again attempts to create whimsey out of the extremely mundane, and once again fails miserably at harkening any emotional impact from his dry suffering artists. Having not been familiar with director Leos Carax, I wasn’t at all prepared for his entry entitled “Merde”, a baffling, antagonizing, and brutal allegory starring Denis Lavant as a pint sized monster living in the sewer who emerges only to fling grenades at innocent bystanders. It’s tantalizing despite being completely ridiculous. Bong Joon-ho, the brilliant director of Memories of Murder and The Host, ends with “Shaking Tokyo”, the story of a shut-in who’s structured his isolated interior life around the meticulous order of objects, a lifestyle that gets shaken to the core when an Earthquake opens his eyes to a beautiful pizza delivery girl. Like his feature films, Bong deconstructs genre with a razor-sharp attention to detail, in this instance the brief romantic moments between the characters share a physical connection with the crumbling city around them. In this uneven and strange Tokyo!, Bong’s entry stands out as the one vision able to grasp it’s complex surroundings. 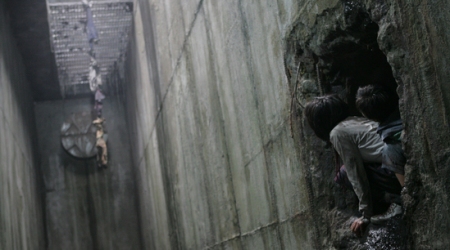 At first glance, The Host might seem like typical monster movie fare, easy to discount and define. However, Bong’s masterful film is not just about the physical beast that rises from the Han river slurping victims and dragging them back into the sewer, but also the monster inside modern day infrastructure and institutions which infect the public with misinformation and doubt. Throughout The Host, the police, hazard response, hospitals, the media, and the government, each fail in almost every respect responding to the beast’s appearance and rampage. Bong chooses to show this epic disaster through the eyes of the Park family, a middle class clan with three generations consisting of a grandfather, two sons and a daughter, and one adorable and brave granddaughter named Hyun-seo. When the youngest is taken by the beast, the rest set out to find her, often discovering their societal institutions standing in the way of any progress through the use of double speak and lies. It’s a stirring indictment geared at exposing the mistreatment of citizens on a mass level in favor of “politics as usual”, and The Host frames this discourse beautifully within the traditional monster movie genre. Unlike his American counterparts, Bong gives the viewer plenty of early looks at the beast, both up close and in fantastic wide shots, showing it’s range of motion and taste for human flesh. The blood and guts are complimented by personal devotion to a comedy of errors within the Park family, each suffering from the loss of human life but also through the indecision’s which have made them suffer before the beast appears. One moment in particular stands out, best signifying this impressive approach toward complex character development. In a moment of relief, the Park family return to their home (which is also a food stand on the bank of the Han) to eat, all but the missing Hyun-seo about to dig into cup of noodles. Bong dissolves to include Hyun-seo in the middle of the shot, a transcendent image of completeness and love missing from the portrait, the possibility she might not return filtering through the air. It’s a fantastic shot of a realistic and crucial human loss, and it exemplifies the ideas behind The Host‘s seemingly simple horror exterior. His film is brutal, funny, and has a genuine sense of humanity felt in the final, incredibly restrained sequence. Like Bong’s serial killer masterpiece Memories of Murder, The Host subverts genre in many refreshing ways, proving that his technical and visual skill equal his knowledge of film history. What an amazing thought – a mainstream director with palpable ideas and the clout to test them in the dangerous commercial waters of the West. American “autuers”, take note.