I’ve had a great run here at the Los Angeles Film Festival, and I’d especially like to thank Doug Jones and his wonderful staff of programmers and volunteers for running the festival with seamless precision. After 21 films, 3 interviews, and host of  late nights, I’m ready to head home to the friendly confines of San Diego, CA. But first, 2 final reviews from my last day at the festival. And thanks to all of you readers out there. Without you, I’d be screaming into the wind.

The buzz couldn’t be hotter for Australian David Michôd’s debut feature, which had a great run at Sundance and now here at the LAFF. Still, I can’t fully endorse this sometimes enthralling pressure cooker of a gangster film. While calculating and cunning, the film is far too plodding to sustain the tense momentum it desires so badly, and at times it gets completely stuck in a thick narrative mud.

Animal Kindgom charts the experiences of 17-year old J (Josh) (James Frecheville) who moves in with his volatile extended family of criminal uncles after his mother overdoses. J immediately gets consumed by their operations, and Michôd uses the metaphorical title early and often to create a rigid universe where creatures of all kinds are led to slaughter. The first act of Animal Kingdom fuses the murderous actions of the Melbourne Robbery Squad with the brothers’ genuine need to transcend their reputations and go straight. The result is a devastating introduction to the overlapping moral ambiguity occurring on each side of the law, and during these sequences Animal Kingdom lives up to its reputation.

But while technically impressive and tonally gripping, Michôd’s film returns to the well too many times. The film repeats actions and plot devices until each character becomes a hollow representation rather than an actual complex entity. During the pointless voice-over narration and endless slow-motion sequences, Michôd tips his referential hand of genre influences far too obviously. While the film shows a great eye for camera movement and blocking, the unfocused pacing scatters characters and scenarios at the drop of dime. The meandering script slowly falls apart as each character comes into full bloody focus, ultimately descending into free fall throughout the climax. With Animal Kingdom, its kinetic virtues are outweighed by a crushing sense of familiarity and banality. Ironically enough, it doesn’t go far enough into the complexities of these lions and lambs to make a lasting impact. 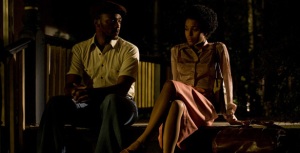 My last film at the 2010 LAFF, Tanya Hamilton’s Night Catches Us, was another hot ticket due to its reputation from previous festivals. Anchored by two electric lead performances from the always great Anthony Mackie and Kerry Washington, Night Catches Us intricately details a specific social space attempting to transcend the past while dealing with traumatic land mines still wreaking havoc. So the textures of location take on a special meaning and tension, connecting character with symbolism in nicely subtle ways.

Set completely in a Philadelphia neighborhood circa 1976, Hamilton uncovers the personal artifacts and relationships linking the now distant memory of The Black Panther movement and a tangible disillusionment for the future. Mackie plays Marcus, a disgraced ex-panther who returns home for his father’s funeral and gets re-entrenched in the local scene, connecting again with his old friend Patricia (Washington). But Hamilton focuses on how these characters traverse physical and mental spaces, disavowing “action” for long conversations between people longing for a connection. There’s much to admire here, especially the acting and the dynamic musical score by The Roots.

But the detailed construction of this specific time and place occasionally gets overwhelmed by the predictability of the plot, the pandering stoicism of certain characters, and the easy villainy of others. Also, Hamilton doesn’t fully explore the relationship between Marcus and Patricia’s curious daughter Iris (Jamara Griffin), who consistently mines the past for clues to her upbringing. Sadly, the adult world seems to be more important than a child’s perspective, and this choice keeps Night Catches Us from being a great film. Still, the overall passion of Hamilton’s direction shines through the actor’s faces in offhand looks of reflection, and these images speak volumes about the film’s soulful attention to key redemptive moments.