Here are links to my complete coverage of AFI FEST 2010 over at The House Next Door.

– Thanks to Ed Gonzalez and Slant Magazine for making this coverage possible. 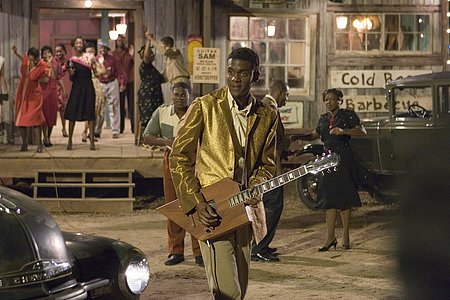 A sublime slice of Southern Americana from John Sayles, a true master of regional storytelling and nuanced ensembles pieces. In Honeydripper, Sayles compliments his usual layered dialogue with an expanding visual dynamic subtly referencing the burning social contexts of the 1950’s.

With the help of cinematographer Dick Pope, Sayles instills a roving sense of the past which haunts each character as they traverse through the sunny stillness of the Arkansas countryside, a place framed by blatant racism and subtle jealousy. While music (both played and imagined) helps structure the rambling story, a shared sense of place connects diverging moments of sadness and joy, highlighting the beauty and necessity of each.

Gambling in the early days of baseball has unfortunately evolved into the steroid era of recent years, but the negative affect on the game will eternally be the same. Corruption in professional sports might not seem like a pressing matter in these turbulent and violent times, but we must remember the ones hurt most by the cheating of sports heroes is always the youngsters who idolize them. While John Sayles mosaic of the 1919 Black Sox scandal adopts an appropriately detailed and historically savvy approach, it’s his treatment of the child fan that stands out, boys whose faith in the purity of baseball becomes tarnished forever. These street urchins feel incredible disappointment when the grown up world of greed and intimidation invade their national pastime, and the results linger long after the film. The only word that comes to mind for Shoeless Joe, Bucky, or their modern day counterparts, has to be shame.

It’s incredible that most John Sayles films, ranging from the depiction of our drug epidemic in Brother From Another Planet, border conflicts/racism in Lone Star, or homosexuality in Lianna, so consistently feel light years ahead of their time. Sayles is without a doubt the most important American independent filmmaker since Cassavetes, an ultimate humanist tackling crucial social issues while complicating regional borders and character types. Lianna, set amongst an East Coast college town, is a bold and honest film about Lesbianism experienced by a WASP professor’s wife and her strident attempts at independence in the face of social opposition. But Sayles doesn’t make Lianna (Linda Griffiths) a sympathy figure. His heroine exists in an educated world where the “don’t ask don’t tell” theory dominates. Even when Lianna comes out, she’s not physically alienated, just left alone. Lianna ends up being a thorough examination of loneliness and sadness, where one woman experiences a true awakening only to find out the world has already moved on. Lianna isn’t different because she’s a Lesbian, only because she thinks people see her differently, and her journey becomes one of trust in those that stick with her, not just of self discovery.

The cinema of John Sayles is crucial to American moviemaking, not simply because of his stellar writing and way with actors, but due to his independent spirit. He crafts films outside the studio system, funding them himself and creating on his own terms. I discovered Sayles in high school after my great 11th grade History teacher Mr. Sutton introduced me to Matewan. I went on to view almost his entire filmography, and many of his films, including Lone Star and Limbo became all-time favorites. Most of all, I admire Sayles for the characters he creates. With the exception of Silver City, Sayles has never let me down. I missed Passion Fish during my first fore into the Sayles canon, and I’m sorry I didn’t watch it sooner. Perfect example of how Sayles uses regions to counteract and parallel relationships. Mary McDonnell’s newly paraplegic soap star and Alfre Woodard’s newly clean drug addict find reason in each other, both to live and to love. Haunting images of the bayou, compliments of ace D.P. Roger Deakins, only add to the layers of subtext passed from one character to the next.