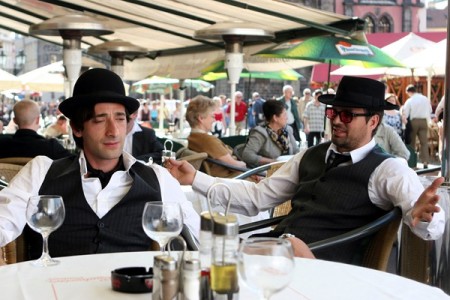 In one way or another, every film manipulates the viewer. It’s the essence of the beast. Yet Rian Johnson’s sophomore effort The Brothers Bloom folds the art of trickery onto itself, morphing what begins as a charming con man story into a prolonged and sometimes irritating series of plot twists, character reversals, and thematic revelations.

Bloom begins with a whimsical prologue introducing the brothers as children, and we get a glimpse of the rules/roles of the con game they will soon perfect. Johnson then cuts forward, Steven (Mark Ruffalo) and Bloom (Adrien Brody) now legends in the confidence game and ready to pull off one final job on a wealthy eccentric named Penelope (Rachel Weisz). From here on out, the characters become secondary to the shifty narrative, submerging the themes of sibling rivalry and conflicted identity underneath an ocean of manipulation.

As with Johnson’s shifty debut Neo-noir Brick, The Brothers Bloom seeks to cleverly revitalize a lost genre, this time the Screwball Comedy. But the results are much the same; a sometimes convoluted, sometimes invigorating exercise in nostalgic recognition.

During its most concise moments, The Brothers Bloom works beautifully as a character study of two brothers coming to grips with their past traumas. At its worst, the film looks and feels like a Wes Anderson rip-off, from the snap zooms to the drawn inter-titles and quirky supporting players. Once again, Johnson appears to be trying too hard to sell material that’s already solid in a pure form. For every exciting step forward, he seems to take two back toward cliche. 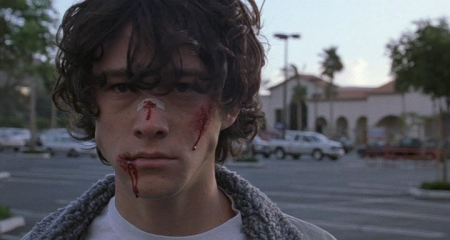 Rian Johnson’s flashy and flimsy debut works best as an introduction to the complexities of Neo Noir (my students loved it), playing with the classic genre conventions just enough while injecting a modern energy into what boils down to a very standard plot. Having disliked the film immensely upon it’s 2006 release, I can still say upon second viewing that the third act is a messy hodgepodge of posturing characters and inane crescendos of violence. But that’s not to say Johnson isn’t an immense talent, especially at subverting expectations with characters.

Joseph Gordon Levitt’s Brendan is a brilliantly conflicted centerpiece who keeps evolving to his surrounding environment, at times vulnerable and melancholy, while at others deceptively brutal. Despite what the film’s defenders continue to say, Brick stands upright because of Brendan’s pain and longing for a sense of place, not because his roundabout dialogue or street smarts. In the end, Johnson’s main focus remains teen identity snuffed out by adult cynicism, an unsettling theme when considering the generation immediately younger than your own.