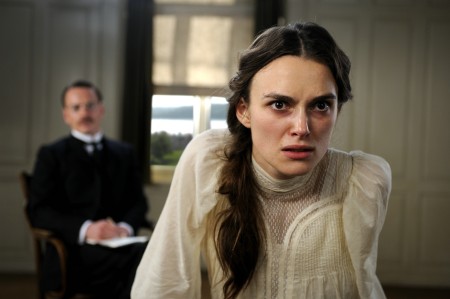 The films of Canadian director David Cronenberg are a nasty brood, wildly divergent in terms of narrative yet thematically connected by the same obsession with the un(natural) evolution of body and mind. Initially known for constructing some of the 1970’s and 1980’s most harrowing and challenging genre films (Shivers, Scanners, The Fly), Cronenberg has since evolved toward a more classical, calculated form of storytelling in films like A History of Violence and Eastern Promises. Despite this shift, Cronenberg’s brilliantly subversive obsessions remain the same.

With A Dangerous Method, a sly and smart examination of the tumultuous Carl Jung/Sigmund Freud relationship during the early 1900’s, Cronenberg reaches the apex of this auteurist progression. His thematic concerns (deformity, disease, repression), once so brazenly represented by external violence or sex, are almost completely internalized in A Dangerous Method, revealed meticulously through longing facial expressions, razor-sharp glares, and extended dialogue sequences. Fittingly, there’s much time spent on the process of relationships, the way people’s perceptions of each other change over time …

Read my full review at SanDiego.com.

It’s been a busy week over at my home away from home GCP, where I tackle John Hillcoat’s long delayed The Road.

It’s a somber, faithful adaption of Cormac McCarthy’s brilliant novel, but something is lost in translation, namely the horrifying detail of dying a slow interior death. The horror! 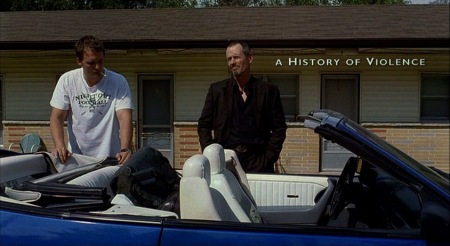 – “The Best of the Decade Project” is an ongoing series of essays written by Match Cuts and The Filmist concerning the finest films of the last ten years.

For David Cronenberg’s A History of Violence, the Western code of protection hasn’t died as much as it has transformed into something far more complex, deceptive, and selfish, defining a modern world strictly divided by outward appearance and connected by interior conflict. In the film’s hypnotic opening long take, two men exit a motel room, gaze up at the sky then proceed to “check out.” The camera follows closely, oozing with menace but never confirming actual danger until Cronenberg cuts inside the motel office, revealing pools of blood and two dead bodies. When one unexpected survivor appears, the killer’s action is deliberate and swift. These men are “bad men”, plain and simple, unflinching and brutal in every respect, and they aren’t singular figures. Cronenberg’s universe is chalk full of them.

The whimpers of one doomed child lead to the screams of another, a young girl who awakens from a bad dream to the support of her family. Father Tom Stall (Viggo Mortensen), mother Edie (Maria Bello), and son Jack (Ashton Holmes) encircle the little girl like covered wagons protecting a train of travelers, reassuring her that monsters don’t exist. Oh, but they do, and this dichotomy shows how action and violence transcend physical boundaries, slowly creeping along a landscape where safety is a myth and violence is a certainty.

Like many revisionist Western heroes, Tom Stall is a family man of good standing in his small town community, the owner of a popular establishment and well liked by his peers. His family represents the American dream – a caring, devoted wife, and two seemingly innocent children. But something about the exaggerated locale and people feels forced, off-putting almost. Can it be this simple? Of course not, and when the two men from the first scene enter Tom’s diner, we know what to expect from them. What isn’t expected is Tom’s pinpoint deadly reaction, dispatching both men with a proficiency that calls into question his background. While certainly self-defense, Tom’s actions are too swift, too effective, and seem completely out of place on the homestead.

Cronenberg evolves this uncertainty of character throughout the rest of the invigorating narrative, forcing Tom and his family into a direct confrontation with the ugly reality of past events, furious demons rearing their ugly heads demanding payment in full. Each scene uses modern locales to confirm the Western iconography at their core. A shopping mall turns from a place of consumerism to a desperate stand off between mother and villain, and a school hallway illuminates a concise burst of unexpected violence between young men. Cronenberg complicates our expectations at every turn, most notably focusing on Tom’s eyes as they slowly change from simple hero to conflicted anti-hero, caring father to deliberate killer.

The film infuses a brilliant third act with dynamic clashes between family, acts of retribution that clarify Cronenberg’s deconstruction of Western archetypes. Husband and wife contradict a previous act of love with an uncomfortable, loveless sex scene. Tom and his gangster brother (William Hurt) work out decades of repression and subtext in one bloody set piece. Finally, the traditional American family sits down together for one last supper, broken, changed, and warped by the reality that their exterior selves hardly match the brewing infusions of hatred and fear simmering inside. Their inability to look each other in the eyes becomes complimented by an ensuing dread of moving on together, in this house, as a family built on lies. But that might be better than nothing. 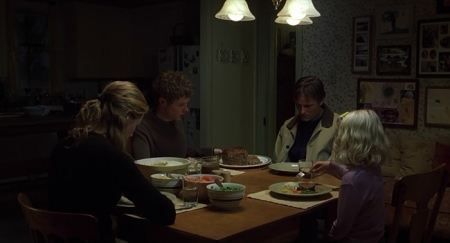 A History of Violence is a nightmarish walk down memory lane, where characters compromise, murder, and deceive in order to protect an image of family, a shadow of togetherness. Surnames hold so much history, even when that history is built on fabricated versions of reality and dead bodies. Cronenberg dissects this idea with a razor sharp attention to human interaction, peeling away the layers of a man yearning for something more than murder and death, but dependent on it all the same. You can’t deny your true self, and Tom’s atypical homecoming holds none of the joy or celebration it should.

Or, the destructive softening of Western badasses. Ed Harris’ curious deconstruction of Wild West stoicism is at times inept and surprisingly tedious. However, by the end of the film it’s revealed that ineptitude and tedium represent a key theme when looking at these particular characters’ weaknesses. Rene Zellwegger’s character, a flimsy tart who strolls into town and manipulates a power struggle between a legendary lawman (Harris) and an Eastern thug (Jeremy Irons), unearths the whiney undertones of both hero and villain by flocking from one to the next depending who has the power. The film’s conscience, played by Viggo Mortensen, watches in terror as his ideological code crumbles before him. Unlike the kinetic gunplay of Open Range or even Unforgiven, Appaloosa paints violence in broad and lifeless tones, more offshoots of the dramatic crisis between the characters than genre conventions. As a Western lover, I can’t say Appaloosa is that enjoyable, simply because it attempts to show these Western archetypes as simpletons looking for the basic necessities of life – love, stability, and identity. Locale and lingo play almost no role in this character study, and as Mortensen’s roughneck rides into the sunset disappointed and dejected, we can’t help but share his confusion. Where have all the heroes gone? According to Appaloosa, they weren’t there in the first place.