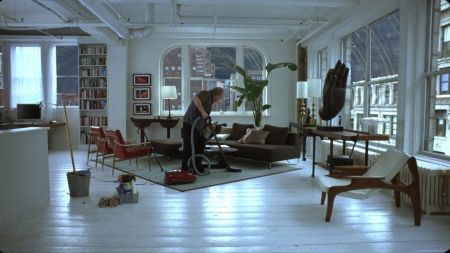 I’ll preface these thoughts with a caveat – one viewing of Charlie Kaufman’s epic mind game isn’t enough, and I can’t wait to return to this haunting and problematic film. Most off all, Synecdoche, New York exudes the texture and density of its characters and mise-en-scene, often hiding clues behind walls, within parallel scenes, and around conventional narrative cues. What’s most interesting is Kaufman’s use of cinematic time and space, shifting the emotional and physical backdrops without much recognition by the screenplay or the characters themselves. Caden Cotard (the great Phillip Seymour Hoffman), a theater director of much acclaim but not much mainstream appeal, sleepwalks through life while constantly worrying about death. When Cotard gets a McArthur Grant to construct a play of “great importance”, the cast of characters in his story inevitably line up for a chance at something timeless. Cotard begins to construct a mammoth recreation of the various scenes of his own life, then begins reconstructing the recreations, adding layer upon layer until reality and fiction literally merge together. This doesn’t come close to properly describing Kaufman’s narrative, and maybe the point is you can’t truly break down one man’s life into a simple distinction of good and bad. For Kaufman, the process of living becomes contradicted by the obsession of mortality, feeble and tragic attempts at controlling one’s world, be it real or meta, by dissecting every nuance down to it’s core. Cotard re-presents his fictional existence onto those around him, creating a sprawling monolith to his own suffering and weakness. Or at least that’s the opinion I’m re-presenting onto a complex work that might change with each life experience, morph with each broken heart, and shift with each passing glance.