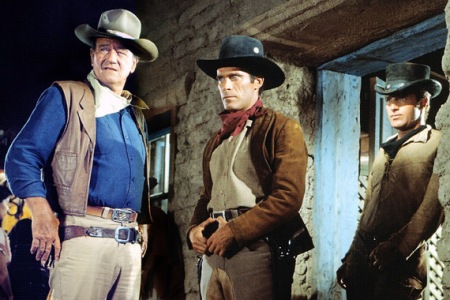 As a Western swan song for Howard Hawks, El Dorado wonderfully illuminates a cozy sentimentality riding under the surface in much of the director’s oeuvre. Robert Mitchum and John Wayne play aging icons (the sheriff and gun for hire respectively) who join forces to protect a family of ranchers from an aggressive cattle baron, and their relationship revolves around traditional motifs of respect and competition. Echoes of Rio Bravo obviously abound, but El Dorado turns what could be a tense narrative into a no-pressure reunion of sorts, where the characters are in little real danger except for possibly missing out on spending time together. There’s a sadness in Mitchum’s eyes as he hobbles down the street with Wayne at his side, as if finally realizing how quickly time passes by in Hollywood’s idealized world of the West. El Dorado might not be any sort of masterpiece, but like Hatari!, it’s an entertaining romp through familiar situations with legends of the genre, led down the thoroughfare by a director devoted to the importance of professional friendships and friends that are professionals.