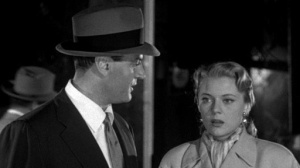 An intricate web of deceptions and delusions, Phil Karlson’s 99 River Street epitomizes Noir seediness, gazing an unflinching eye at the overlapping darkness of greed and grime. From the punishing opening boxing match to the brutal last stand finale aboard a frigate, Karlson constructs a gritty timeline of pummeling knockdowns, trading jabs between those who usually take the punches and those gleefully dishing them out.

The film becomes a sinking sandbox of personal desperation, each character attempting to regain the lost power of their desires/expectations, only to be foiled time and again by that devil, chance. Ernie Driscoll (John Payne) lost his shot at becoming the Heavyweight champion of the world, and is now relegated to driving a cab and trying to support his demanding gold-digger wife. Karlson jettison’s Driscoll into a labyrinth of collective uncertainty, seamlessly linking him to diverse story-lines involving a jewel heist, a Broadway play, and multiple murders. But each snakes back to the street, and Karlson pits his characters against exteriors oozing with menace, as if the structures themselves are luring the characters to their demise.

99 River Street exists within a singular Noir universe, where the outside world passes by without much interference, making the characters’ entrapped situations all the more dire. Ernie’s rage consistently complicates his heroic acts – at one point he’s ready to beat his cheating wife to death. But Noir has always been about shades of evil, and Ernie’s occasional outbursts against the innocent pales in comparison to the brutal violence perpetrated by the greedy criminal underbelly.

Karlson understands how to orchestrate potent violence, both offscreen and on, and like his masterful The Phenix City Story, 99 River Street interconnects devilish betrayals with justified retributions. The power struggles in these films are always shifting, molding into the dangerous environment on display. But 99 River Street makes it personal, challenging the essence of the American dream by subverting its very value. Ernie pulls himself up by his bootstraps, only to find his hard work diabolically undermined by circumstance.